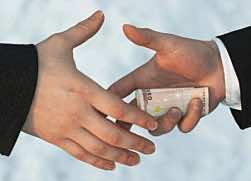 By
Nadia ELBOUBKRI
-
Nadia Elboubkri is a graduate of Temple University where she holds a Bachelor of the Arts in Political Science with a focus on Middle Eastern studies and political economy.
Sep 24, 2013
Spread the love

Washington- On Morocco’s rocky road to reform, the number one issue that has consistently been revisited whether discussing the judiciary, unemployment, human rights, or elections, is corruption in the government.

Scaling down corruption in Morocco has been a topic of contention since before the February 20th movement, though the issue was brought to the forefront of public debate when, despite constitutional reform in 2011, corruption continues to stall progress in public affairs.

In their 2013 report on transparency in Morocco, some progress was noted in the dissemination of information within the public administrations; however, the financial sector, justice system, and police force are still limiting public access to information.

In Morocco the internal, or rather, institutional, acceptance of public officials limiting the disclosure of information to third parties without the permission of their superiors, has given public officials an impenetrable level of power within the government. Additionally, according to TI, it has “created a culture of secrecy” which is now “rooted and grounded,” making it that much more difficult to hinder any attempt to increase transparency.

Morocco is attempting to lift the veil of corruption and open up public affairs to the general public. For instance, the new coalition government recently unveiled a charter outlining a series of judicial reforms to strengthen the independence of the judiciary and prosecution for corruption mechanisms.

These measures are welcome as well as long overdue, according to TI.

Transparency’s pressure on Rabat to take greater action against corruption has already shown some progress. In early September already, the Superior Council of the Judiciary increased the penalties and sentencing for public officials involved in corruption (5-10 years against 2-5 years from the previous legislation).

The justice minister, Mustapha Ramid, immediately went into high gear in sanctioning several judges, including revoking four from their positions. And, last week, the Minister of the Interior dismissed a group of twenty municipal councilors, after finding numerous irregularities in public administration.

Concerning corruption, any reform is good reform for Morocco. However, the task at hand is to launch a process for ending corruption that is completely transparent to ensure an unambiguous reform process.