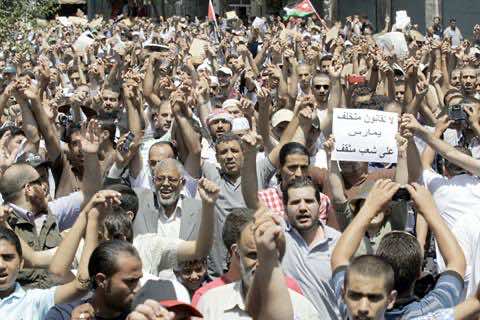 “Egypt’s military coupists took this decision against people’s will after they failed to win their confidence,” Zaki Bani Rsheid, deputy leader of Jordan’s Brotherhood, said on Facebook.

“The coupists are trying to reestablish oppression and tyranny as well as absolute military rule. They want to silence opposition and turn everyone into followers.”

The Egyptian court on Monday also ordered the Brotherhood’s assets seized, in the latest blow to the decades-old Islamist movement of deposed president Mohamed Morsi.

The court also banned “any institution branching out from or belonging to the Brotherhood,” the official MENA news agency reported, an indication of possible restrictions of the movement’s political arm, the Freedom and Justice Party.

Bani Rsheid said the ruling “shows that the military rulers are going through a deep crisis and that they are weak and confused.”

“Everyday the coup’s agenda, which is linked to the Zionists and some countries in the Gulf, becomes clearer,” he added.

“The Islamists in Egypt were banned in the past, but this did not prevent them from wining the confidence of the Egyptian people,” he said, referring to the string of electoral victories that preceded Morsi’s downfall.

Formed in 1928, the Muslim Brotherhood was banned for decades before a popular uprising overthrew president Hosni Mubarak in 2011.
The group swept subsequent parliamentary elections and successfully fielded Morsi in last year’s presidential vote.