New York- Gathering near the UN headquarters in NY, Iranian and Syrian expats in the US staged a protest against the policies of Iranian President Hassan Rouhani and Syrian President Bashar al-Assad. 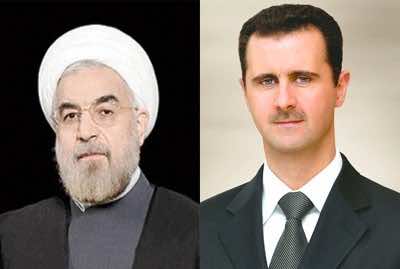 New York– Gathering near the UN headquarters in NY, Iranian and Syrian expats in the US staged a protest against the policies of Iranian President Hassan Rouhani and Syrian President Bashar al-Assad.

As opponents of their regimes’ policies, the Iranian and Syrian protesters, including religious officials, blamed the governments in Tehran and Baghdad for 52 people killed in the Ashraf Camp in Iraq, condemning the use of chemical weapons by the Assad regime on its own people.

There have been ongoing protests in the surroundings of the UN headquarters in New York, on the occasion of the opening week of the 68th UN General Assembly Meeting.

Protesting the possible meeting of US President Barack Obama and Iran’s Rouhani, a spokesperson for the Iranian opposition group Neriman Sirin said “We are telling the US that a deal with Iran will be a waste of time. Rouhani is no different from the former President Ahmedinejad. Their goals, foreign polices are all the same. They won’t give up on the nuclear weapons.”

The group, describing themselves as “civil activists” also held a ceremony to condemn the early September attack on Iraq’s Ashraf Camp that kiled 52 people including 6 women, amid Persian slogans

Sirin also argued that 3,000 people in Camp Ashraf handed over their arms in 2003 on the promise of protection by the UN and the US. “However, Maliki executed the opponents in the camp upon the request of Iran’s then supreme leader Khamanei. Neither the UN nor the US kept thier promises for protecting them,” she said.

Spokesperson also noted that they support the Syrian opposition against Assad regime, saying “They are opposing Assad for a justifiable reason. We believe that Iran will fall if Assad falls. We demand democracy, freedom and a secular regime in Iran.”

“This will destabilize Turkey as well as the other neighbouring countries. This enemy must be warded off,” he said.

Camp Ashraf – home to Iranian opposition – was a refugee camp in Iraq’s Diyalah province near the Iranian border and headquarters of the exiled People’s Mujahedin of Iran (PMOI/MEK).

On September 1, at least 52 Iranian dissidents, including six women, were executed — shot in the head and face, several with their hands tied — according to a U.N. statement.

The members of the MEK in the camp held the Iraqi government responsible for the massacre while Iraq continues to deny its responsibility for protection of this group and dodges blame its direct involvement in the massacre.

The UN High Commissioner for Refugees (UNHCR) asked the Iraqi government to launch an investigation to make light into the massacre.

Iraq’s government wants to shut down the facility known as Camp Ashraf and transfer thousands of Iranian exiles living there to another camp out of the country as it is growing impatient with a UN coordinated effort to resettle them abroad.