Casablanca - Conflicting stories have arisen after an 18 year old young man died during protests against dismantling a camp in the city of Assa Zak, in southern Morocco. The authorities said his death was caused by “injury from a sharp object," while the family insisted that their son was killed by “rubber bullets.” 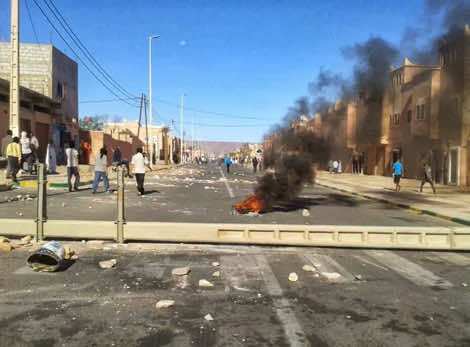 By
Jamal Saidi
-
Jamal Saidi is an English teacher.
Sep 26, 2013
Spread the love

Casablanca – Conflicting stories have arisen after an 18 year old young man died during protests against dismantling a camp in the city of Assa Zak, in southern Morocco. The authorities said his death was caused by “injury from a sharp object,” while the family insisted that their son was killed by “rubber bullets.”

Lmehdi Hamour, uncle of the victim, said in a phone interview with hespress.com that his nephew died following rubber bullet wounds in the back. He added that the body is still being kept in a morgue, waiting for the autopsy examination.

The family’s claims contradict the official account of Rachid Echine’s death. The prefecture of Asa Zak denied use of live bullets by security forces to target the young during the protest dispersal, while stressing that he died due to “ injury in the back, at the level of heart, with a sharp object“.

On the other hand, Lmehdi Hmour emphasized the family’s rejection of any attempt to decontextualize the death of their son which came as result of, “an unfortunate accident caused by the lack of responsibility in dealing with young people demonstrating for bread, and the desire to live with human dignity”.

The uncle also condemned claims that tend to politicize the incident and link it with demands that go beyond social concerns. He described those allegations as “the second murder of the young man.”

It is worth noting that the 18 years old died on Monday during social protests in the city of Asa zak following dismantling of the Tizimi camp, near a small village called Vask, in the region of Guelmim, by security forces.

Several local associations and branches of political parties accused the authorities of using excessive force as well as expired tear gas and rubber bullets during the process of dismantling the camp and protest dispersal.