New York- The United Nations Development Program (UNDP) has welcomed Morocco's commitment in the fight against poverty and deemed that the National Initiative for Human Development (INDH), launched by King Mohammed VI in May 2005, can serve as "an important example" for the Arab and African states. 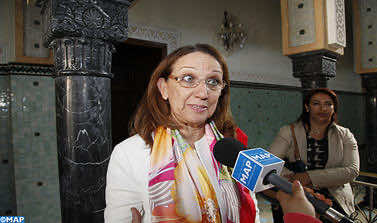 New York- The United Nations Development Program (UNDP) has welcomed Morocco’s commitment in the fight against poverty and deemed that the National Initiative for Human Development (INDH), launched by King Mohammed VI in May 2005, can serve as “an important example” for the Arab and African states.

“I would like to congratulate Morocco on its commitment in the fight against poverty and efforts to achieve the Millennium Development Goals (MDGs) by 2015,” said the UNDP Deputy Administrator, Rebecca Grynspan, during a debate on “Africa beyond 2015: What goals for which development model?”, held on Wednesday under the patronage of King Mohammed VI at the UN headquarters in New York.

“Clearly, the experience of Morocco which, through the National Initiative for Human Development, has developed policies for implementation of sectorial programs and control mechanisms, may serve as an important example for the Arab States and the African continent, “said Grynspan during the debate chaired by the High Commissioner of Planning Ahmed Lahlimi  on the sidelines of the 68th session of the General Assembly of the UN.