The death of a young Saudi during a car chase by the country’s religious police has stirred uproar on the social media, especially after it became known that the involved members of the Saudi religious police fled the scene of the accident. 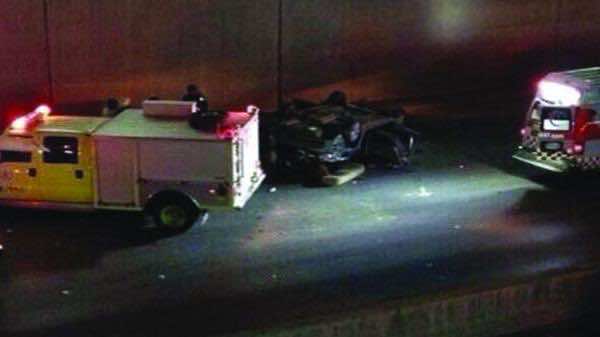 The death of a young Saudi during a car chase by the country’s religious police has stirred uproar on the social media, especially after it became known that the involved members of the Saudi religious police fled the scene of the accident.

The news of the crash went viral when a witness first uploaded a video of the car chase, which took place Tuesday in the capital Riyadh, on his twitter account with the hashtag “The commission killed two men on national day.”

Reactions appeared to be tense but divided between those who supported the religious authority, commonly known as the Committee for the Promotion of Virtue and the Prevention of Vice, and those opposed it.

The authority is also referred to in Arabic simply as “the Haia” meaning “the committee.”

A Twitter user named @talal tweeted: “The religious police had killed people in al-Madina, and killed in Tabuk, and Baljurashi and today they killed in Al-Riyadh and on National Day. The Haia are blood thirsty.”

Another user @Nejer wrote: “The Haia’s situation is similar to many government entities in Saudi; they all need restructuring and fixing.”

On the opposite side, @I_7rh wrote: “We certainly love the Haia because they apply the Islamic law forbidding evil doers. Therefore we hold those who do wrong to the Haia accountable even if they’re its own members.”

@GhaidaAbdulaziz posted a comment saying “There’s no sound evidence, and I feel that it’s a hoax so I urge you all to stop destroying the Haia’s image.”

Members of the religious police reportedly chased a vehicle with two men inside causing it to overturn. One of them was reportedly killed.

The two police members reportedly fled the scene but were later arrested and are being investigated.

Assistant spokesman for the Haia Mohammad al-Sheraimi said investigations are under way and all those responsible for the accident and the subsequent death of the Saudi will be held accountable, the Saudi Gazette reported.

An eyewitness, Mohammad al-Sahabi, said the Haia vehicle deliberately bumped into the small car from behind.

The vehicle swerved off the road, fell off a bridge, and overturned, while the Haia pursuers fled from the scene, al-Sahabi said.

He said the driver’s head was completely crushed and he appeared to have died on impact.

“We know we have wrongdoers and a victim, now all we need is to implement the Islamic ruling,” said twitter user Turki Ghabiwi.