CASABLANCA - Over fifty Moroccan journalists residing outside of the country are due to launch a hunger strike on Saturday September 28, as a symbolic protest in solidarity with Ali Anouzla, chief editor of Lakome.com, according to the same electronic website. 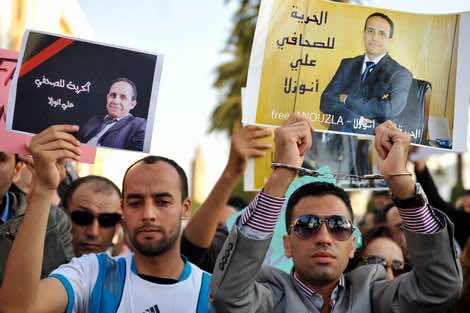 By
Jamal Saidi
-
Jamal Saidi is an English teacher.
Sep 27, 2013
Spread the love

CASABLANCA – Over fifty Moroccan journalists residing outside of the country are due to launch a hunger strike on Saturday September 28, as a symbolic protest in solidarity with Ali Anouzla, chief editor of Lakome.com, according to the same electronic website.

The journalists condemned the Moroccan government’s enactment of terrorism law in cases that are related to news publications, alluding specifically to the Rabat prosecutor’s recent announcement to charge Ali Anouzla under Morocco’s anti-terrorism law.

They also regard the charge of “incitement of terrorism” against the chief editor to be worse than previous tendency of authorities to neglect civil Press Law and sue journalists according to the Moroccan penal code.

They described Ali Anouzla’s case as “another chapter of restriction on  reedom of speech and press as well as  a misuse of the judiciary system in a bid meant to settle scores with the owner of a free and bold pen.”

The statement made by the journalists called upon the Moroccan state to reconsider the law of terrorism and take into consideration recommendations made by national and international human rights organizations.

It is worth recalling that the chief editor of  the electronic website Lakome was arrested for allegedly broadcasting a  video of Al-Qaeda in the Islamic Maghreb [AQIM].Since then, a widespread solidarity has sparked among  human rights activists and journalists in Morocco and abroad.