LAGOS  – The march to the government house in Gusau, the state capital, was led by Zamfara Widows Association chairperson Suwaiba Isa, who said up to 8,000 unmarried women were registered with her group seeking suitors. 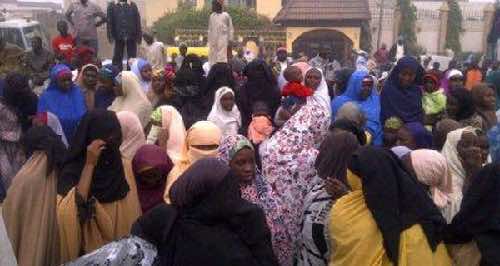 LAGOS  – The march to the government house in Gusau, the state capital, was led by Zamfara Widows Association chairperson Suwaiba Isa, who said up to 8,000 unmarried women were registered with her group seeking suitors.

Women in Nigeria’s northwest Zamfara State on Friday held a march to protest what they say is a scarcity of husbands in the region, especially for widows and female divorcees.

The march to the government house in Gusau, the state capital, was led by Zamfara Widows Association chairperson Suwaiba Isa, who said up to 8,000 unmarried women were registered with her group seeking suitors.

Friday’s rally aimed to push the government to address the issue.

In a telephone conversation with Anadolu Agency after the march, Suwaiba said that out of the 8,000 women registered with her group, 5,380 were divorcees, 2,200 widows and 1,200 (female) orphans. The remaining 80 were also looking for men to marry, she said.

“This is not easy for us,” Suwaiba said when asked whether women were not ashamed of protesting publicly about such a sensitive issue in Zamfara, widely seen as a deeply conservative region.

“As women we have honor, but this is the way to announce our plight to the government. Is it not outrageous to have this crowd of women as unmarried, particularly when most of us are within child-bearing age?” she asked.

“The society where women are left to cater for themselves will suffer the consequences,” Suwaiba added.

One of the protesting women, who identified herself as Asmawu Dan Zaria, said they had approached the Zamfara Hisbah Commission – a government board seeing to the enforcement of Islamic Sharia – to help them get married.

She said they needed husbands to become whole, as they were not living “normal lives.”

“Many of us cannot afford two meals a day because there are no men to support us,” Dan Zaria, 24, told AA.

Sa’idu Goshe, who identified himself as the patron of the widows’ association, noted that women were currently asked to purchase household items such as beds, mattresses and other basic necessities before moving to their future husbands’ home.

The phenomenon in most of Nigeria’s north, home to a huge Muslim population, directly conflicts with the Islamic prescription that men should provide their wives’ needs.

“We are also appealing to the commission to assist the association in screening suitors for the women. We need this screening to know suitors’ health status, source of livelihood and ability to maintain a family,” Goshe told AA via phone.

The pressing social problem prompted local authorities in northern Nigeria to take a few measures in an effort to address the crisis.

On Thursday, the Kano State government, also in the northwest, approved the sum of 240 million nairas to organize a mass wedding for singles, divorcees and widows – the second such event in two years.

But husband scarcity is now a trend across much of Nigeria, as men are believed to be less willing to get married due to rising costs of living.