KHARTOUM– The Sudanese Journalists Network (SJN) has announced a general strike in protest at a security crackdown on newspapers covering demonstrations against government austerity measures. 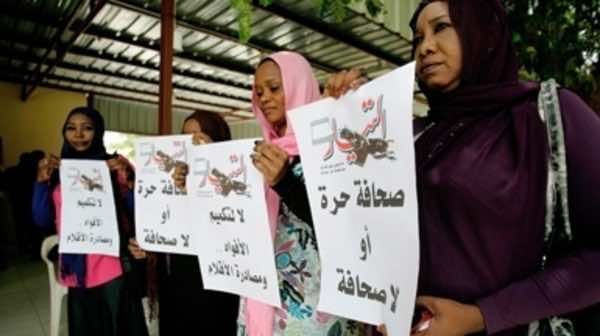 KHARTOUM– The Sudanese Journalists Network (SJN) has announced a general strike in protest at a security crackdown on newspapers covering demonstrations against government austerity measures.

“Silence and working under the current situation are no longer possible, especially in light of the unprecedented move by the authorities following public demonstrations that broke out in all cities of the country, which was accompanied by a government security crackdown on the press with the aim of glossing the media of murder and brutality carried out by the security services against protesters,” the SJN said in a statement obtained by Anadolu Agency.

The SJN said that the National Security and Intelligence Services (NISS) control the press by imposing censorship on newspapers and violates the rules of ethics and code of conduct.

On Friday, Sudanese authorities confiscated editions of two newspapers over their coverage of mass protests against government austerity measures.

Three Arabic dailies have stopped the issuance of their editions following NISS orders to stop their coverage of the demonstrations, except through official statements issued by Sudanese authorities.

“The professional reason is that the coverage of such protests should at least include two points of view – the government and protesters – while the government forces newspapers to report only its viewpoint,” Adil told AA.

“The moral and ethical reason is the misleading information imposed by the authorities on the real numbers of killed protesters,” he said.

“They insist that only 30 were killed, while official medical statements and reports of hospitals speak about different numbers” he added.

“For all that, there is no independent Sudanese journalist who would accept to work under such circumstances,” Adil said.

The SJN spokesman said that the strike will be open until the crisis is resolved.

“We have two conditions to resume work; lifting the pre-censorship on the press and giving the journalists full independence, otherwise the strike will continue and we will resort to other online multimedia to report on the ongoing incidents and express our opinion,” he said.

Mass protests engulfed Sudan following a government decision on Sunday to lift state subsidies on fuel and several other commodities as part of a controversial economic reform program. It also raised taxes on a number of consumer goods.

While activists say more than 70 people have been killed in the protests, Sudanese authorities put the toll at 29.

Consisting of more than 640 members, the SJN is a parallel body to the official Sudanese syndicate, the Sudanese Journalists Union (SJU).

It was founded in 2008 following a similar crackdown on the press by security forces.

SJN says the SJU does not represent independent journalists in Sudan, but rather is a pro-government union.