Tehran- A shoe was thrown towards Iranian President Hassan Rouhani's car Saturday as he arrived home to a mixed reception for his historic call with Barack Obama, an AFP correspondent reported. 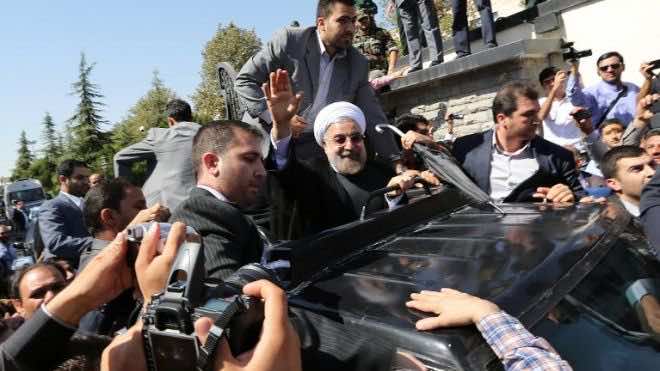 Tehran- A shoe was thrown towards Iranian President Hassan Rouhani’s car Saturday as he arrived home to a mixed reception for his historic call with Barack Obama, an AFP correspondent reported.

Some 60 hardline Islamists chanted “Death to America” and “Death to Israel” as Rouhani’s motorcade drew out of Tehran’s Mehrabad Airport.

But they were outnumbered by 200 to 300 supporters of the president who shouted: “Thank you Rouhani.”

The shoe missed the car and Rouhani stood up through the sunroof to acknowledge the crowds.

Before leaving New York where he attended the UN General Assembly, Rouhani had a 15-minute telephone conversation with Obama on Friday, the first contact between leaders of the two countries in more than three decades.