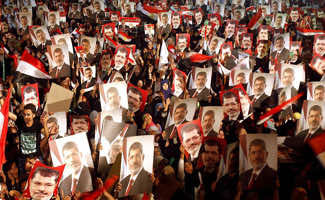 Tunisian President Moncef Marzouki had called on Egypt’s new rulers to release the Islamist Morsi, who has been detained in a secret location since the military overthrew him on July 3.

The United Arab Emirates, which strongly supports the military-installed government in Cairo, had earlier recalled its ambassador to Tunisia in protest at Marzouki’s remarks.

The Emirati newspaper Al-Khaleej reported the UAE’s decision was made after “attacks made by the Tunisian president against Egypt and its new leadership, which the Emirates find unacceptable.”

Morsi faces trial on charges of inciting the killings of protesters during clashes outside the presidential palace in December 2012, but no date has been set for the hearings.

Police have arrested more than 2,000 Islamists in a broad crackdown on Morsi’s Muslim Brotherhood movement.

More than 1,000 people, mostly Islamists, have also died in clashes with security forces since August 14, when police broke up two Islamist protest camps in Cairo.