TUNIS- The UGTT trade union confederation mediating crisis talks in Tunisia said Saturday that the ruling Islamist Ennahda party had agreed to a plan for talks on a new government. 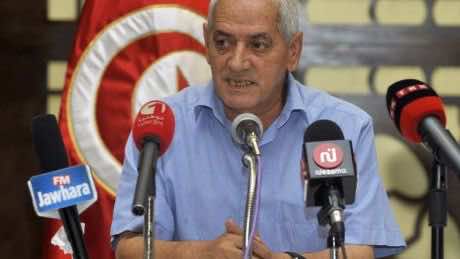 TUNIS- The UGTT trade union confederation mediating crisis talks in Tunisia said Saturday that the ruling Islamist Ennahda party had agreed to a plan for talks on a new government.

The country’s largest union confederation called on the Islamists and the secular opposition to agree on a date next week for a “national dialogue” aimed at ending a crisis sparked by the murder of a prominent opposition MP in July.

The birthplace of the 2011 Arab Spring has been plunged into a protracted political crisis, with the secular opposition accusing the moderate Ennahda of failing to rein in radical Islamists.

In a statement published on its official website the UGTT, which has had strained relations with Ennahda and had previously accused it of dragging its feet, said the ruling Islamists had fully accepted its transition plan.

“The organizations sponsoring the plan welcome the results and call on all parties to engage in consultations to determine the date of the national dialogue,” it said, adding that it hoped to convene the meeting sometime next week.

The UGTT had earlier called for a protest campaign to pressure Ennahda to fully accept its transition blueprint.

It had accused Ennahda of doing everything to ensure the failure of the roadmap, which it drafted along with the employers’ organisation Utica, the Tunisian League for Human Rights and the bar association.

Ennahda rejected the charges, and accused the largely secular opposition of distorting the mediators’ proposals by demanding the government’s immediate resignation.

The roadmap sets a three-week deadline for the formation of a cabinet of independents to replace the government, after the launch of a dialogue with opposition parties.

It also sets a four-week deadline for adopting a new electoral law, announcing a timetable for fresh elections and completing a long-delayed draft constitution.

Ennahda spokesman Lajmi Lourimi told Agence France Presse his party was “ready to enter into dialogue with all parties that desire it”.

“The dialogue could begin next week, but no date has been set.”