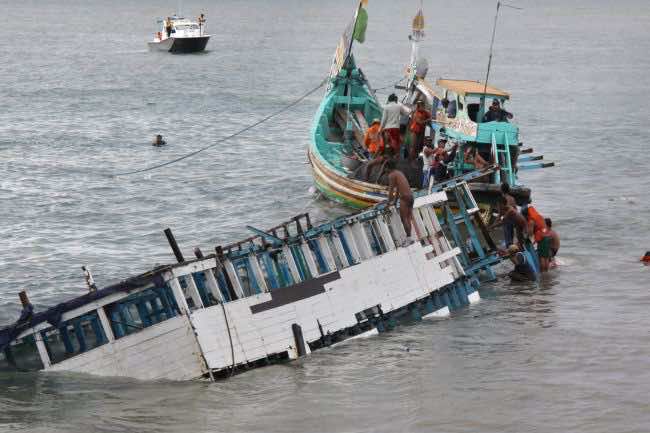 TRIPOLI – Lebanese asylum-seekers who died when a boat sank off Indonesia were the victims of people smugglers who prey on them and Syrian refugees seeking to better their lives.

The death toll from the sinking on Friday of the Australia-bound boat off the coast of Java has risen to 28, with many more still feared missing, according to Indonesian police.

The Lebanese foreign ministry said there were 68 Lebanese, including children, on board the ill-fated vessel and that 18 survived the ordeal while at least 29 were still missing.

Most of them came from Akkar, an impoverished and remote province of north Lebanon where thousands of Syrians have sought refuge from the 30-month that has wracked their country.

“Illegal migration has increased with the influx of Syrian refugees,” a Lebanese security source told AFP on condition of anonymity.

“Criminal networks have started to focus on Syrians but also on Lebanese who want to emigrate,” he said of the people smugglers.

According to the source, around 250 people, including Syrians and Lebanese, have since March paid huge sums of money to people smugglers for trips to Australia.

Relatives of Lebanese who have emigrated through such networks in recent months told AFP that a Tripoli-based man organises the journeys from Lebanon to Australia through Indonesia.

The smugglers’ contact in Indonesia is an Iraqi man known only as Abu Saleh who monitors the arrivals, they said.

The first part of the trip consists in obtaining a visa for Jakarta, which the Indonesian embassy in Lebanon grants Lebanese passport-holders without much difficulty.

Once in Jakarta the migrants are led secretly to main Indonesian island of Java from where they take boats for the high-risk sea trip to Australia seeking asylum.

Lebanese authorities on Saturday arrested a suspect involved in the people smuggling network as part of an investigation ordered by Justice Minister Shakib Qortbawi.

In Lebanon’s second city Tripoli, Khaled al-Rai is mourning the loss of his uncle Talal and of his cousins seven-year-old Karim and nine-year-old Nour, who were on the boat that sank Friday.

“They were fleeing conflict and poverty in Tripoli. It seems their fate was to die in Indonesia,” Rai said. His aunt Randa and five-year-old cousin Khalil survived the tragedy.

The wanted to escape their home in Bab el-Tebbaneh, an impoverished district of Tripoli that has been rocked by frequent sectarian fighting linked to the conflict in Syria.

“Their situation was terrible. My uncle was a mechanic. Because of the constant fighting, he hardly ever had work and his house was shot at twice,” said Rai.

Fed up and hoping for better life

Fed up and hoping for a better life, he was lured by the people smugglers into selling his garage and taking loans to pay for the family’s trip to Australia.

Most of the other victims are from the village of Kabiit in Akkar province.

“In March and April, some 50 residents, among them my 16-year-old son, emigrated (illegally) to Australia through Indonesia,” said village mayor Ahmad Darwish.

“I paid $8,000 for his trip. I hesitated, but I know that there isn’t any work here. Most young people emigrate, and even more now with the influx of Syrian refugees,” Darwish told AFP.

An estimated nearly 760,000 Syrians fleeing their country’s brutal war have fled to Lebanon since the conflict erupted in March 2011, and many found refuge in Akkar, exacerbating fragile resources.

Nasr Khodr said his brother Hussein paid a smuggler $40,000 to get to Australia along with his pregnant wife and their eight children.

All but Hussein died in the tragedy, Nasr said.

Kabiit residents said migrants used to try to reach Australia via East Timor but when applying for visas became difficult they turned their attention to Indonesia.

Rai says he is trying to repatriate his aunt and cousin from Indonesia, but “they tore up their passports to be able to seek asylum”.

The security source added that “some Lebanese migrants have bought fake Syrian passports off mafias, so that they can apply for asylum”.

Refugees from Afghanistan, Iran and Sri Lanka often take routes via Indonesian waters to try to flee their countries.

Thousands of asylum-seekers have travelled by boat to Australia this year, and scores have died trying to make the journey in unseaworthy vessels over the years.

Officials in Indonesia say they fear many people are still missing after the boat carrying would-be refugees also from Jordan and Yemen broke into pieces and sank in rough waters.