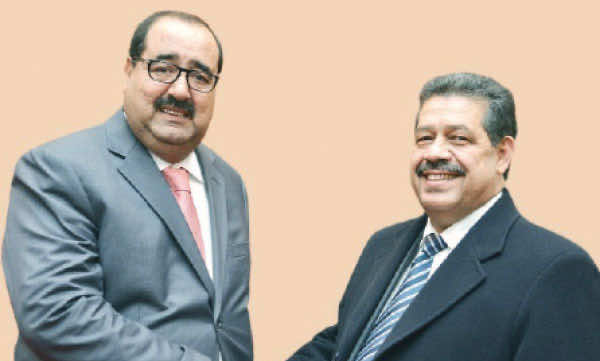 By
Jamal Saidi
-
Jamal Saidi is an English teacher.
Sep 30, 2013
Spread the love

Casablanca- Taoufik Bouachrine, editor of the independent newspaper, Akhbar al-Youm, described the opposition parties’ work towards following the path of its counterparts in Arab Spring countries as “the coming epidemic from the East”.

Mr. Bouachrine cited Chabat, Secretary General of the Istiqlal Party, when he said Abdel Ilah Benkirane’s fate will be similar to that of the ousted Egyptian president Mohamed Mursi. He similarly quoted Idriss Lechger, Secretary General of the Socialist Union Party, when he stated that after  repercussions following the assassination of Shokri Belaid in Tunisia, the  party became aware that unions  may be able to form a strong front against  the ruling party, alluding particularly to the role played by unions to put pressure on the Tunisian Nahdda government. Therefore, Lechger continued, coordination with three unions that are affiliated with the Socialist and Independence parties are being launched to form an anti-government social front.

The chief editor of Akhbar Alyawm went on in his attempt to deconstruct the opposition parties’ attempt to import the “epidemic” or opposition techniques from the East when he advanced the following arguments :

Is Morocco affected by political poverty to the extent that the opposition parties are forced into importing opposition techniques from abroad to use it against PJD and its government?

The situation in Egypt is very complex and the implementation of its model is a major threat to the stability of Morocco and to the Moroccan exceptionalism.

The reality of the Islamist Tunisian Nahdda is different from that of PJD in Morocco. Egypt and Tunisia are republics that underwent revolutions while Morocco is a kingdom that experiences political transition in a smooth and quiet way despite facing difficulties along the way.

Benkirane is not Mursi and he will not be. He is not Ghenouchi and he will not be, even with similarities or junctions between the situation of the Kingdom and the troubled Middle East by temptation as well as internal and external disturbances. At the present moment, we have to move away from the East, as much as possible.

Arab Spring states became open ground for numerous conflicts between regional and international powers that reject the establishment of  democratic ruling as well as the governance of legitimate leaders elected via electoral polls.

Gulf states are waging a war of “house by house, room by room, alleyway by alleyway (Arabic zanga zanga)” to transform Arab Spring into autumn. Israel does not appreciate  an Arab map where governments alter every four years and public opinion matters. Iran does not want a stable and strong neighboring Arab  countries competing its ambitions in the region. It is not in many power’s interest to have Arabs enter into the modern era. On the contrary, they want us to stay in the middle ages so that oil remains cheap and markets stay open and trade balance remains  in their favor.

The story that says Gulf oil is in battle against Islamist extremists in Tunisia and Egypt is sheer nonsense. The reason is that countries, where women are still banned from driving a car, hands are cut because they steal an egg, and people are still punished with lashes, cannot claim to be fighting brotherhood extremism.

In Morocco, we have to be aware that many nations and major powers and satanic devices do not want Morocco’s democratic transition to succeed, nor do they want the success of the country’s experience in “integrating Islamists” into governance. Such achievement embarrasses Gulf countries in front of their people and their failure to contain the Islamist faction will be revealed to the West. Failing is not due to extremism, but due to the structure of the regimes that are closed and therefore does not accept openness to all categories of society, from the right to left to the center.

We have  been busy suing  Ali Anouzla unjustly over charges on terrorism and consequently forgotten  the content of the video which is attributed to al – Qaeda and the analysis of its contents and decoding its messages. We  have forgotten to ask the traditional criminal question: Who benefits from deployment of a tape that incites terrorism and murder and chaos at this particular time ?

The timing of the dissemination of the video and its contents, in addition to its explicit and implicit terrorist encrypted messages, are all aimed at targeting the current  political experience, which is a Moroccan recipe of a third way in dealing with the issues of democratization. I therefore do not disregard the possibility that there are more than one group behind the making of the aforementioned video. Experts know that Al Qaeda is being infiltrated by various Arab and foreign intelligences. Further, the focus on one subject and a particular slogan there is a particular intent behind the tape. Therefore, one has to be cautious, for stability of the country is above any big or small concerns.