Cairo- A coalition of judges and lawyers supporting Morsi held the Egyptian prosecution responsible for "violations against anti-coup prisoners and kidnapped revolutionaries." 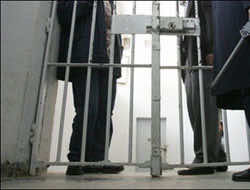 Cairo- A coalition of judges and lawyers supporting Morsi held the Egyptian prosecution responsible for “violations against anti-coup prisoners and kidnapped revolutionaries.”

A coalition of judges and lawyers supporting ousted Egyptian president Mohamed Morsi claims that a pro-democracy prisoner has died of torture in jail.

“Abdel-Wahab Mohamed al-Kashef, one of the anti-coup political prisoners died on Saturday in Minya prison from torture,” the Anti-coup Judiciary Independence Front said in a statement, a copy of which was obtained by Anadolu Agency.

The Front held the Egyptian prosecution responsible for “violations against anti-coup prisoners and kidnapped revolutionaries.”

Officials from the Interior Ministry were not immediately available for comment on the claim.

If confirmed, al-Kashef will be the second pro-Morsi supporter to die in prison.

Senior Muslim Brotherhood member Safwat Khalil, 59, died in prison on Thursday from cancer, shortly after a court ordered his release on medical grounds.

A member of his defense team said Khalil’s health had deteriorated after being transported to court in a police truck instead of an ambulance.

A senior member in the Brotherhood’s legal committee, who asked not to be named, told AA that several Brotherhood members who have health problems have been denied release on health grounds.

Hundreds of the group’s senior and mid-ranking members are currently detained over various charges, including incitement to murder and violence and involvement in attacks on state and private properties.