GENEVA - Davutoglu stressed that the focus should not merely be on the Assad regime's chemical weapons since more than 120,000 people had died in conventional attacks. 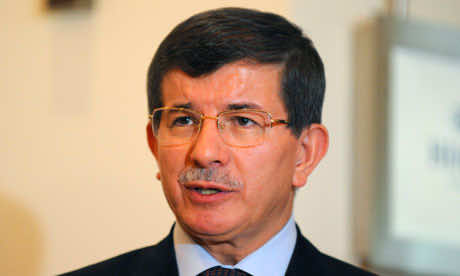 GENEVA – Davutoglu stressed that the focus should not merely be on the Assad regime’s chemical weapons since more than 120,000 people had died in conventional attacks.

Turkish Foreign Minister Ahmet Davutoglu has said, “I call on the UN Security Council to issue a strong resolution to solve the humanitarian situation in Syria without further delay.”

Davutoglu delivered a speech at the 64th Executive Committee Meeting of the UNHCR in Geneva titled “Solidarity and Burden Sharing with the countries hosting Syrian refugees” on Monday.

Drawing attention to the ever deteriorating situation in Syria, Davutoglu emphasized the need for collective action by neighboring states.

Commenting on last week’s UN Security Council resolution about Syria and the framework agreement decided in Geneva, Davutoglu said, “I want to express our dissapointment. There was not even one reference to the humanitatian situation.”

Davutoglu highlighted that international pressure on Assad had to continue as the Council decision did not mean a solution to the Syrian crisis.

Davutoglu stressed that the focus should not merely be on the Assad regime’s chemical weapons since more than 120,000 people had died in conventional attacks.

He mentioned that he did not believe the crisis would end soon, warning neighboring states against the possibility of increasing numbers of refugees.

“Our open door policy for Syrians is sitll in tact,” he added.

Davutoglu stated that there were around 550,000 Syrians in the camps, including 6,000 babies, and that an average of 8581 people were registering in hospitals in Turkey daily.

He also said Turkey’s aid along the border had amounted to $ 200 million, while investments in the camps cost $ 2 billion.