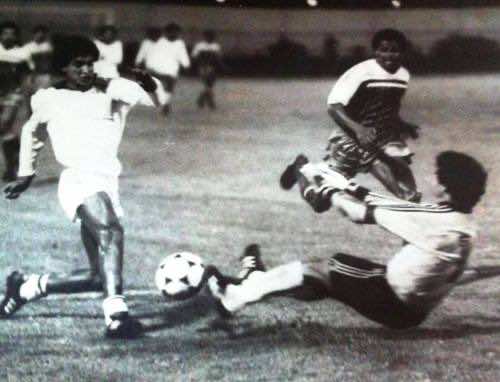 WASHINGTON – The name Hassan Abourouaine is no stranger to Moroccan soccer enthusiasts of the mid 80s to mid 90s. His name comes up regular in soccer discussions of that era.

His style of play was very exciting and has gained him fans in Morocco and the Gulf, where he won tournaments and played for a Saudi team as a professional. He has not been heard from for quite a while neither in the media nor anywhere else until now. I caught with Hassan Abourouine and had the following discussion:

Hassan Abourouaine is a former Moroccan professional soccer player born on July 14, 1966 in Mohammedia Morocco. I am a family and currently reside in Boston, Massachusetts. This has been the case for the past 12 years or so.

Talk to me about your soccer career?

Soccer has been part of my life as long as I can remember. After playing in my neighborhood with other kids, I joined my home team, Chabab Mohammedia’s U14 club and worked my way up to the first team. This involved going through the U16 and U18 categories. I played my first game for the team A during the 1986-87 season. After, I joined Renaissance de Settat in the 1988-89, then Olympic Casablanca in 1989, a year in Saudi Arabia for Itifaq, and finished my career back at my home in 1997.

How about your experiences with the national team?

My first game was in 1984 with the Moroccan national team category Cadet, then the under 21 in 1985 and 1986. I took part in Youth World Cup qualifiers against Mauritania, Ivory Coast, and Togo.

What titles have you won and what are your personal achievements?

I won my biggest titles with Olympic Casablanca aka then as Jamiyat AlHalib. We won the the league Cup or Coupe du Trone in the 1991-92 season, the Moroccan Championship during the 1994-95 season, 3 time the Arab Cup back to back in 1991 in UAE, 1992 in Saudi Arabic, and 1993 in Qatar where I was voted MVP of the tournament.

Did you expect these kinds of achievements at anytime in your life?

Honestly yes. Since I was a kid playing in the streets of my neighborhood, I dreamt that one day I would be winning championships and would standout as MVP in tournaments.

What is your assessment of t e professional Moroccan soccer league today compared to when you played?

I see today’s Moroccan soccer league as different and less competitive then when I played. The reason for that, partly, is that many outstanding players are very quick to leave to play overseas. Their teams are happy to oblige for financial reasons. Many, if not most teams, struggle financially despite the “professional” label attached to the league. Some teams are in a very bad shape. There are also serious problems in players’ developments programs and I hope all this gets rectified.

You had a reputation for possessing incredible individual skills and you thrived on taking on players one on one which overshadowed how good you were as a team player.  Was there any defender that you dreaded playing against?

No, I was never afraid or hesitant to take on anyone and there were some great defenders in my days. I have always had confidence in myself and I was aware of my abilities with the ball.  I knew I could play at the highest level.

What advice do you have for new and upcoming players?

To succeed, the formula is not that complicated provided you possess talent. Work hard and continuously strive to improve your craft and hone your skills. Another important element of success is to take care of their bodies. Furthermore, it is important that finances are appropriately managed because a soccer career is very short. One must invest and save for the future.

I have been in oblivion for many years and so I want to thank you for taking the time to do this. I hope soccer in Morocco improves be it the league or the national team because I know we have an abundance of talent; we just need to find the right formula for nurturing it to bring back those glory days.