CAIRO - An exhibition of ancient artefacts that narrowly survived the turmoil of the 2011 Egyptian uprising opened in Cairo on Monday under the title "Destruction and Restoration". 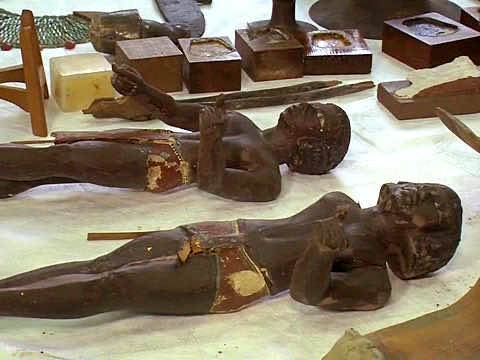 CAIRO – An exhibition of ancient artefacts that narrowly survived the turmoil of the 2011 Egyptian uprising opened in Cairo on Monday under the title “Destruction and Restoration”.

The exhibit consists of 29 artefacts, including 11 that had been stolen from the famed Egyptian Museum near Cairo’s Tahrir Square on January 28, when protesters calling for the overthrow of president Hosni Mubarak drove his feared security forces from the streets.

The other 18 artefacts remained in the museum but were damaged or destroyed by looters. All 29 artefacts have since been recovered and restored.

The artefacts include three priceless statues from the era of the famed Pharaoh Tutankhamun, including a gold statue showing him spearfishing from a boat on the Nile.

They also include a mummy that had its head torn off during the looting. Antiquities authorities said they were able to reattach it using pharaonic-era methods.

A total of 54 artefacts went missing from the museum when looters broke in during the uprising, mainly treasures from the era of pharaohs Tutankhamun and Akhenaton. Twenty-five of the pieces have since been recovered.

State Minister for Antiquities Mohammed Ibrahim insisted Monday that none of the missing artefacts had been taken out of Egypt and said authorities were still searching for them.