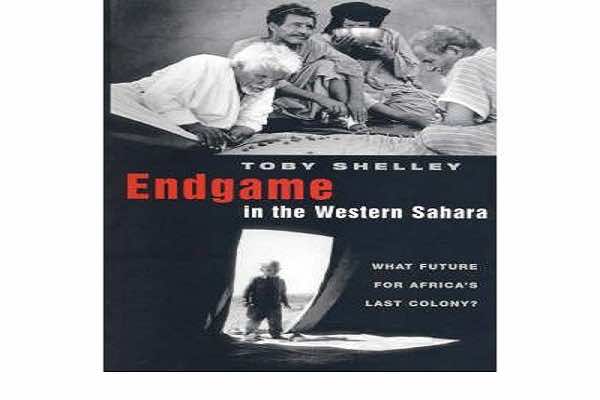 FEZ- Before writing my review to this politically biased book, which is supposedly meant to answer the question of why the claims of inhabitants of the Sahara, South of Morocco, to be granted independence have not been realized, I took an academic pledge to be thoroughly objective in what comes hereafter.

Toby Shelley, a British journalist, published his book in 2004. A year later, Erik Jensen published what might be considered a sequel to Endgame in the Western Sahara. Jensen’s book Western Sahara: Anatomy of Stalemate (2005) completes Shelly’s book with the sense of trying to answer the same questions laid out in both books. I intend to proceed with this analysis via a display of the writer’s claims by advancing refutes of historical proofs for the first half of the book and factual proofs for the rest. This way, the historical approach is more valid to trust. If Man could change geography after wars and political conflicts, history remains (mostly) beyond disfigurement.

The book claims that Polisario is the historical independence movement of the Sahrawi people. According to Shelly, the front struggled against Spanish rule in the South of Morocco. Historically, since its occupation by Spain, different Sahrawi tribes fought the colonial powers in numerous battles under the Moroccan monarch’s flag. King Mohamed V initiated the struggle and after the North’s decolonization, all efforts of King Hassan II were directed to the Southern part of his kingdom—the 1957 armed uprising in the Sahara is the best proof of this effort while Morocco had freshly been granted independence from the French colonizer up North.

Heads of Sahrawi tribes used to take the long journey willingly from the Southern parts of the kingdom to the capital of their country, first Fes then Rabat, to pledge allegiance to the Sultan (king and Emir of Muslim believers), but where is Polisario in all this?  Polisario simply never existed before 1973. Since 1960 the U.N exercised pressure on Spain to decolonize the Southern territories of Morocco. The mechanism of decolonization, as seen by the UN then, was a referendum through which the inhabitants of the occupied territories would exercise their right of a national self-determination. The U.N resolution 1514 (XV) was undeniably the first and most geo-politicized resolution ever taken in the region.

The resolution served political and economic superpowers’ agendas during the cold war and plotted to trim Morocco’s territorial map. Spanish authorities would later mould the resolution into their advantage. In 1967, they created a Djema’a (or Djemaa, meaning “Congregation” or “Gathering” in Arabic). It was the official colonial legislative assembly in the occupied Sahara. Spain managed to control this assembly until 1974. Being engulfed by the growing voices in the international community to leave the Sahara and the Moroccan political and military (mostly guerillas) struggle, Spain planned a collateral damage scheme through a request, allegedly made by Djema’a, to allow the inhabitants of the Sahara assert a plan of self-determination.

When Spain started a pre-referendum census, the biggest flaws of the Sahara case were committed against a great number of Sahrawi. Spanish authorities deliberately dropped the inhabitants who moved to Tarfayia when Spain lost control of this strip in 1958 in favor of Morocco. Many other regions in the Sahara were wholly discarded from the census. As a matter of fact, Morocco rejected the census and the results of any referendum that may be based on such incomplete census. Morocco and Mauritania asserted the historical proofs to sovereignty over their territories at the time.

Shelly wrote his book in twelve chapters. In the first half of the book he dealt extensively with the regional and international context of the case, the economic cost of Morocco’s military “invasion” to its territories, while the appropriate word could be “defense and protection” of its frontiers with neighboring countries. Shelly equally dedicated a good deal of his ornate style, which he acquired over the many years of experience as a journalist for the “Financial times”, to talk about the economic riches of the territory in terms of natural resources (phosphates, oil, fisheries).

The writer claims that the Sahrawi population suffered political and cultural pressure during the reign of King Hassan II and does not linger much on the liberalization era of the region since His Majesty King Mohamed 6 enthronement in 1999. The approach of drawing evidence that Shelly based his claims on was a series of interviews he carried with Sahrawi inhabitants and political figures from the concerned parties of the case.

However, the writer’s description and evidence unveiled his political bias since the academic integrity was void within the first half of the book. The real intention was not to display facts to ordinary readers; rather it was to urge international policymakers to exercise more pressure on Morocco so as to make political concessions and compromises. The second half of the book was more concerned with the fierce struggle of diplomats and policymakers of the parties in question within the closed chambers of the U.N.

Overall, the book pours within a hired flow that adopts diverse methods ranging from media-fooling, pre-arranged plotting scenarios and illusionist declarations and interviews. The writer, among others, depicts the Moroccan political line in the region as intimidating.

However, Shelly failed to note that the cultural, social, and security policies Morocco has been applying in the Sahara have proved efficient. The region has been receiving the lion’s share of the national funds dedicated to the Moroccan initiative of human development that King Mohamed VI launched last decade. Security wise, Morocco aced the test of counter-terrorism in the region through a well-devised strategy to keep ponds of militant terrorist groups as dry as the Sahara weather. These groups have been mushrooming in neighboring countries and definitely lurking ready to pounce on the country’s peace.

Finally, Shelly does not provide a comprehensive, multifaceted, and  well –researched empirical analysis of the conflict especially as it is free of academic terminology.