ALGIERS - Six policemen were injured in clashes between rival communities in the Algerian oasis town of Ghardaia, a security source and a human rights activist said on Tuesday. 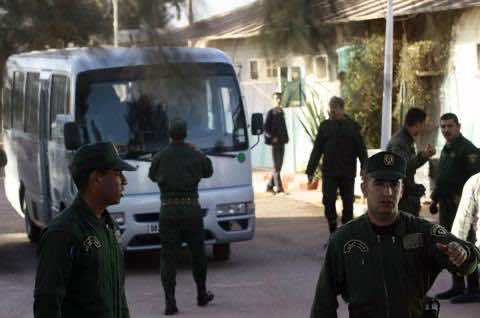 ALGIERS – Six policemen were injured in clashes between rival communities in the Algerian oasis town of Ghardaia, a security source and a human rights activist said on Tuesday.

Four people were arrested in connection with Monday’s violence between young Chaambas of Arab origin and Mozabites, a Berber minority group which adheres to the Ibadi faith, an offshoot of Shiite Islam

There were conflicting reports of the unrest.

A source with the national security service (DGSN) told AFP the  six policemen were hit by stones thrown during a protest against water shortages in Ghardaia.

But according to Kameleddine Fekhar, a human rights activist in the M’zab region, 600 kilometres (400 miles) south of Algiers, some 50 Chaambas armed with stones and knives attacked residents of a Mozabite district, “with the full knowledge of the police.”

“The assailants passed in front of two lorries packed with police, who did nothing,” said Fekhar, who belongs to the Berber community.

“It was only hours after the attack that they were told to intervene, and then not to arrest the assailants but to hurl tear gas canisters at the Mozabites,” he added.

The DGSN source denied the claims and said police intervened to break up a protest by Mozabites who had occupied the street to demonstrate against a four-day water cut in their neighbourhood.

The Chaamba youths left the area left, but the Mozabites began harassing the security forces and throwing stones, the source said.

“They torched vehicles and ransacked the headquarters of the local branch of the Algerian water agency,” he said, adding that four Mozabites were arrested for disturbing the peace and for damaging public and private property.

In May, a dozen people were wounded during unrest that erupted between the two communities in Ghardaia following a dispute over a Mozabite cemetery.