Tripoli- A Tripoli court will decide October 24 whether to indict more than 20 senior figures from Moammar Gadhafi's regime charged with killing protesters during the 2011 revolt that toppled him. 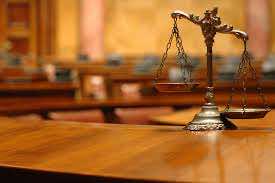 Tripoli- A Tripoli court will decide October 24 whether to indict more than 20 senior figures from Moammar Gadhafi’s regime charged with killing protesters during the 2011 revolt that toppled him.

The officials include Gadhafi’s once high-profile son Seif al-Islam — who was unable to attend because he is being held by rebels in western Libya — as well as former intelligence chief Abdallah al-Senussi.

Moammar Gadhafi was captured and killed by rebels in his hometown of Sirte after an eight-month revolt against his four-decade rule backed by NATO air strikes.

“The hearing on Thursday was devoted to reading the charge sheet. The court fixed the date of October 24 to decide whether to drop the charges or to refer the accused to a jurisdiction of its choice,” defense lawyer Mussa al-Zentani told Agence France Presse.

He added that Seif al-Islam Gadhafi was unable to attend the hearing — held in a heavily guarded courtroom surrounded by tanks and anti-aircraft guns mounted on pick-ups — because of “inadequate security.”

Kadhafi appeared before a Zintan court last month, which adjourned a separate trial until December 12.

The other charged officials, including Senussi Baghdadi al-Mahmudi, the last prime minister to serve under Gadhafi, and Abdelati al-Obeidi, his last foreign minister, were present at the closed-door hearing Thursday, Zentani said.

The officials, who made up much of Gadhafi’s inner circle, are accused of killings and looting, attacks on national unity, drug trafficking, incitement to rape, kidnapping and embezzlement of public funds.

The court has the authority to accept the charges, dismiss them or ask for more evidence, in a process that could take several months.

Rights groups Amnesty International and Human Rights Watch have both urged the immediate handover of Seif al-Islam and Senussi to the International Criminal Court to face war crimes charges.

Family members of those killed in the Abu Selim prison massacre of 1996 — allegedly ordered by Senussi — demonstrated outside the courtroom holding up pictures of those killed.