MOSCOW - Russia said on Thursday it had evacuated its embassy staff from Libya after dozens of protesters attacked its diplomatic mission in Tripoli. 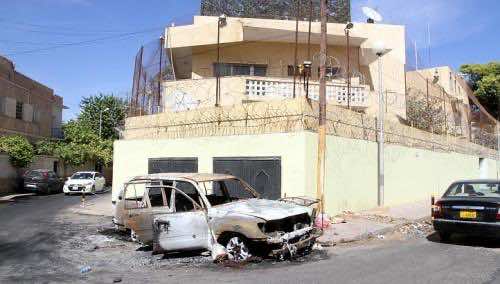 MOSCOW – Russia said on Thursday it had evacuated its embassy staff from Libya after dozens of protesters attacked its diplomatic mission in Tripoli.

Angry protesters on Wednesday tried to storm the Russian embassy following reports that a Russian woman had killed a Libyan army officer.

Libyan Foreign Minister Mohamed Abdelaziz later visited the embassy and told the Russian ambassador that Libya would not be able to guarantee the safety of Russian embassy staff “at this stage”, the Russian foreign ministry said.

“In this situation a decision has been taken to immediately evacuate all employees of our foreign-based missions and their family members from Libya via Tunis,” the ministry said in a statement.

Earlier on Thursday all embassy staff and their family members crossed safely into Tunis, the ministry said, adding they planned to fly back to Moscow on Friday.

A Libyan diplomat was summoned to the Russian foreign ministry in Moscow over the unrest and the country’s top diplomat Sergei Lavrov also spoke by phone with his Libyan counterpart Abdelaziz, demanding his country guarantee the protection of Russian nationals and embassy property.

“Mohamed Abdelaziz assured that the Libyan leadership will do everything in their power” to ease tensions and allow for the return of the embassy staff, the Russian foreign ministry said.

The ministry said the embassy had been attacked by a “group of militants” after Russian national Ekaterina Ustyuzhaninova killed a Libyan officer and stabbed his mother.

The woman has been arrested, the statement said.