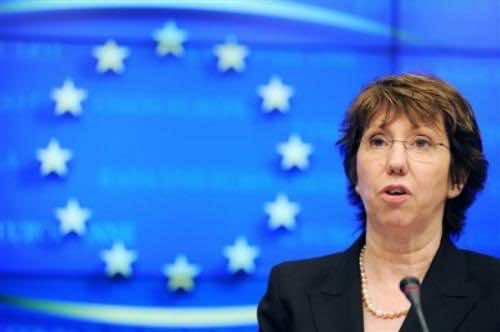 “We talked about the importance of this inclusive process,” she told reporters at the end of her third visit to Egypt since the army ousted Morsi three months ago.

“In terms of inclusiveness it means trying to involve everyone, that also means reaching out to each other,” she said, suggesting the Muslim Brotherhood to which Morsi belongs also be involved in the nation’s future.

Morsi has been detained since the military ousted him on July 3 following a turbulent single year in office.

On a previous visit to Cairo, Ashton became the first official to formally meet Morsi after his overthrow, holding two hours of talks with him on July 30.

Egypt’s new authorities have since launched a campaign against Islamists, many belonging to the Brotherhood.

On August 14, Egyptian police and army stormed two camps of pro-Morsi supporters in Cairo, killing hundreds of protesters in a crackdown that triggered international condemnation.

However, Ashton insisted her trip was not to “interfere or mediate” in Egypt’s affairs, adding that Egyptians were those who should decide their political future.