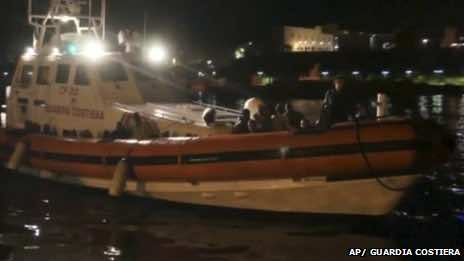 Emergency services on the island of Lampedusa said they had recovered 111 bodies and plucked 155 survivors from the water from a boat with an estimated 450 to 500 people on board.

Divers who explored the wreck spoke of seeing dozens of bodies around the ship and rescuers said more bodies may have been swept further out to sea by the strong currents around Lampedusa.

The badly overcrowded 20-metre (66-foot) vessel caught fire, capsized and sank on Thursday just a few hundred metres from Lampedusa, as its terrified passengers jumped into the sea.

The migrants were Eritreans and Somalis and their boat had departed from the Libyan port of Misrata.

A suspected Tunisian crew member has been detained as prosecutors investigated the tragedy.

Flags flew at half mast across Italy and schools held a minute of silence for the victims while President Giorgio Napolitano called for the abolition of a law against facilitating illegal immigration that penalises potential rescuers.

Locals on the island, which is closer to North Africa than to Italy and has a population of just 6,000, fought back tears as they spoke of the desperate rush to save drowning immigrants.

“The hardest thing was seeing the bodies of the children. They had no chance,” said local doctor Pietro Bartolo, who said in 20 years on the island he had “never seen a human tragedy like this”.

Alessandro Marino, a shopkeeper on Lampedusa, spoke of seeing “a nightmarish situation” when he saw the scene from his boat. Rossella Manuci, a waitress who also came to the rescue, said: “For most of the poor souls, it was too late”.

Map locating Italy’s Lampedusa, where a boat carrying some 500 people caught fire and capsized near the Mediterranean Island on October 3, 2013

Survivors said the fire started when they set light to a blanket on the boat to attract the attention of coast guards after their vessel began taking on water. Medical personnel said many of them had swallowed gasoline and sea water.

Lampedusa is a major landing point for asylum-seekers entering the European Union, with many fleeing impoverished and war-torn countries of Africa, the Middle East and Southeast Asia.

Some 25,000 migrants have arrived in Italy so far this year — more than three times the number from all of last year but still only half the figure for 2011 at the height of the Arab Spring revolts.

Immigration charities estimate between 17,000 and 20,000 migrants have died at sea trying to reach Europe over the past 20 years, crossing on rickety fishing boats or rubber dinghies.

The bodies were being taken to a hangar at the local airport because there was no more room in the morgue on the remote island, which has a population of around 6,000 people.

“We no longer have any space for the living or the dead,” local mayor Giusi Nicolini said on Thursday, explaining that both the island cemetery and the local refugee centre were full.

Islanders preparing a ceremony on Friday to pay homage to the dead said they feared the good weather and calm seas would lead other desperate refugees to attempt the perilous journey.

Italian Interior Minister Angelino Alfano called for more assistance from the European Union to deal with the sharp recent increase in refugee arrivals, calling it “a European tragedy”.

In the last major disaster in June 2011, between 200 and 270 immigrants fleeing Libya are believed to have died off the coast of Tunisia.

In 1996, 283 migrants from India, Pakistan and Sri Lanka perished trying to reach Sicily.

UN chief Ban Ki-moon said he hoped the Lampedusa disaster would be a “spur to action” to protecting migrants’ rights, and improving the public perception of immigrants.

The EU’s Home Affairs Commissioner Cecilia Malmstroem has called on European countries to take in more refugees through legal international channels, which she said would help reduce the number of perilous Mediterranean crossings.

Malmstroem has said she will travel to Lampedusa.

“Italy is not prepared for the surge of migrants on its coasts,” said Monica Frassoni, co-leader of the European Greens at the European Parliament.

She added: “The EU as a whole has a responsibility to develop a more humane and robust system.”