TRIPOLI - An assault on the Russian embassy in Tripoli that sparked the evacuation of its staff highlights a continued inability to protect diplomats that threatens Libya with renewed isolation, analysts say. 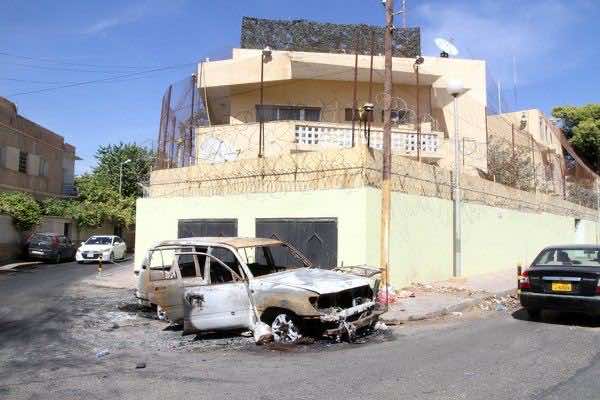 TRIPOLI – An assault on the Russian embassy in Tripoli that sparked the evacuation of its staff highlights a continued inability to protect diplomats that threatens Libya with renewed isolation, analysts say.

Wednesday evening’s attack on the Russian compound triggered an exchange of fire in which two of the assailants were killed.

It came more than a year after ambassador Chris Stevens and three other Americans were killed in an assault on the US consulate in Libya’s second city Benghazi.

Following the September 11, 2012 attack, which was blamed on Al-Qaeda sympathisers, the Libyan authorities promised urgent action to improve security but they have proved unable to guarantee protection for foreign diplomatic missions even in the capital.

Benghazi was the cradle of the 2011 revolt that overthrew veteran dictator Moamer Kadhafi, but ever since his ouster the eastern city has been prey to a array of former rebel militias that the central government has been unable to bring to heel.

“The number of countries that have retained diplomatic missions in the city is in single figures,” the consul in Benghazi of one African government told AFP.

“Despite the prevailing lack of security, we receive no protection” from the Libyan authorities, he said.

“We have a few security agents but they are powerless in the event of an attack. So we try to keep the lowest profile possible and regularly exchange risk assessments with our fellow diplomats on the ground.”

In Tripoli, dozens of protesters attempted to storm the Russian embassy compound on Wednesday evening, setting a vehicle alight and causing some damage to the mission’s entrance gate.

The assault followed a car bomb attack on the French embassy in April which wounded two guards.

Moscow said it had decided to pull out all its embassy staff and their families after the Libyan authorities were unable to provide guarantees for their security.

Foreign Minister Mohammed Abdelaziz denied that Libya had urged Russia to pull out its diplomats.

He said he had merely urged embassy staff to retreat to the relative safety of one of the capital’s two heavily guarded luxury hotels for fear of a second attack on the compound.

“We understand the concerns expressed by foreign diplomatic missions. We are doing our best to improve security for them,” Abdelaziz told AFP.

“But as everybody knows, we are going through a difficult transition.”

In the absence of stronger guarantees from the Libyan authorities, a growing number of foreign governments have taken matters into their own hands by pulling out all but essential embassy staff and relocating those who remain to premises that are easier to secure.

Some have moved to one or other of the two heavily guarded hotels, while others have gone to fortified expatriate compounds.

After the security recriminations that followed the Benghazi attack, Washington has turned its embassy into a fortress.

But the upshot has been that foreign diplomats leave their compounds less and less, with an inevitable impact on their ability to carry out their functions.

“We have orders not to go out any more except in daylight and only when necessary,” one Western diplomat told AFP.

“For several weeks, we have hardly left the compound. We are away from our families and we work and sleep in the same place. It’s depressing.”

Analysts warned that the growing siege mentality among foreign diplomats threatens to leave Libya isolated and reduce its ability to access the foreign assistance it desperately needs.

“If this climate of insecurity persists, the country will return to the isolation it suffered in the days of Kadhafi,” said international relations  analyst Imad Ajaj.

“We need the international community to help us rebuild the country after 42 years of dictatorship under Kadhafi and a conflict which destroyed our infrastructure.”