CAIRO - Islamist supporters of deposed Egyptian president Mohamed Morsi challenged the military Saturday with a call for new protests on the 1973 Arab-Israeli war anniversary after the deadliest violence in weeks. 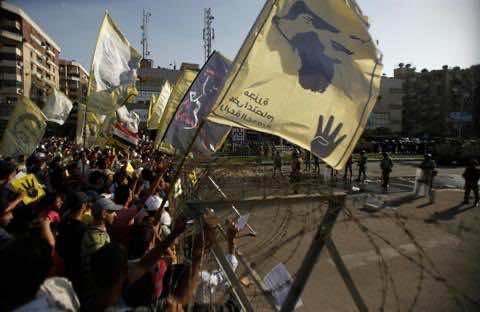 CAIRO – Islamist supporters of deposed Egyptian president Mohamed Morsi challenged the military Saturday with a call for new protests on the 1973 Arab-Israeli war anniversary after the deadliest violence in weeks.

The Anti-Coup alliance of Islamist groups called on its supporters to try once more to reach Cairo’s Tahrir (Victory) Square, blocked off by the army, to mark Sunday’s 40th anniversary of the war.

The conflict, known as the October war in the Arab world and the Yom Kippur war in Israel, is remembered proudly by the Egyptian army as it caught Israel’s defences unawares and led ultimately to Egypt’s recovery of the Sinai Peninsula in the 1979 peace treaty.

“The Egypt Anti-Coup Alliance repeats its call to all Egyptians to continue their protests in every part of Egypt, and to gather in Tahrir Square on Sunday, October 6, to celebrate the army of that victory and its leaders,” the Islamist said.

Attempts on Friday by Islamist protesters against the army’s July 3 overthrow of Morsi to reach Tahrir Square sparked clashes with security forces who responded with tear gas and warning shots.

Four people were killed in Cairo’s deadliest protest violence in more than a month as demonstrators clashed with coup supporters as well as security personnel.

It was unclear whether the dead were Islamists or their opponents. A senior medical official said only that none of them were security personnel.

Clashes were also reported in Alexandria and the Upper Egypt province of Assiut, state media reported.

Alarmed by the violence, both the United Nations and the United States made fresh pleas for peaceful protests.

Morsi, Egypt’s first democratically elected president, was overthrown by the army following mass protests against his year-long rule. He has been held at an undisclosed location ever since.