CAIRO- Supporters and opponents of Egypt's deposed president Mohamed Morsi Saturday called for rival demonstrations marking the anniversary of the 1973 Arab-Israeli war, as the government said it would not tolerate trouble. 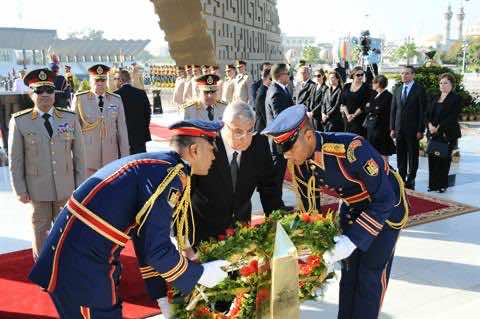 CAIRO- Supporters and opponents of Egypt’s deposed president Mohamed Morsi Saturday called for rival demonstrations marking the anniversary of the 1973 Arab-Israeli war, as the government said it would not tolerate trouble.

The interior ministry warned it will “firmly confront” any violence at protests on Sunday’s 40th anniversary as security was tightened nationwide, state media said.

The Anti-Coup Alliance of Islamist groups led by the Muslim Brotherhood urged its supporters to try to reach Cairo’s Tahrir Square to mark the anniversary.

The conflict, known as the October War in the Arab world and the Yom Kippur War in Israel, is remembered proudly by the Egyptian army as it caught Israel by surprise and led ultimately to the recovery of the Sinai Peninsula in a 1979 peace treaty.

“The Egypt Anti-Coup Alliance repeats its call to all Egyptians to continue their protests in every part of Egypt, and to gather in Tahrir Square on Sunday, October 6, to celebrate the army of that victory and its leaders,” the bloc said.

Attempts on Friday by Islamists protesting against the army’s July 3 overthrow of Morsi to reach Tahrir Square sparked clashes.

Four people were killed in the city’s deadliest violence in more than a month as demonstrators clashed with coup supporters and security forces.

It was unclear whether the dead were Islamists or their opponents. A senior medical official said only that none were security personnel.

Late Saturday, the authorities deployed armoured vehicles around Tahrir Square and allowed people through only via metal detectors at two of its entrances, an AFP reporter said.

Calls for demonstrations on Sunday also came from the Tamarod movement which led nationwide protests against Morsi that finally led to his ouster.

“We call all Egyptians to come out tomorrow across all squares in the country to assert that this nation will not allow its revolution to be stolen,” prominent Tamarod leader Mahmoud Badr told reporters.

‘There can’t be another revolution’

Analysts said the Islamists’ call for protests on Sunday was a high-risk attempt to strip the current high command of the army’s legacy and patriotic pride in the Arab-Israeli conflict.

“They will try to show that the present army is not the army of all Egyptians, but only of those who backed the coup,” said Hassan Nafaa, political science professor at Cairo University.

“But this message will not go down well,” he told AFP.  Nafaa said the Islamists mistakenly believed they could repeat the 2011 protests that swept away veteran strongman Hosni Mubarak and his despised security apparatus.

“The Muslim Brotherhood fails to realise that there can’t be another revolution,” he said.

“Egyptian people are not against the army as they were against the police in January 2011. If there is violence tomorrow, the Muslim Brotherhood will be the loser.”

The Anti-Coup Alliance said Friday’s bloodshed, which it blamed on “attacks on marches and protests”, would only “increase our determination to continue the revolution”.

But the authorities issued a warning to the Brotherhood.

“The interior ministry warns against attempts that may disturb the October 6 celebrations in Egypt,” state news agency MENA quoted the ministry as saying.

“The ministry asserts its determination to firmly confront all violence and infringements of law by the Muslim Brotherhood supporters through their marches.”

Interim president Adly Mansour said in a televised speech marking the anniversary that the authorities will “defeat much-hated terrorism and blind violence with the rule of law that will protect the freedom of citizens and resources”.

The Anti-Coup Alliance has desperately sought to keep up the momentum of its protests against the military-installed interim government.

But its ability to mobilise large crowds has been sharply reduced by the rounding up of nearly all of its leaders.

More than 2,000 Islamists have been detained since security forces cleared two main Cairo protest camps on August 14 at Rabaa al-Adawiya and Nahda squares in an operation that killed hundreds of people.

Top Brotherhood leaders are behind bars and face trial, including Morsi who has been held at an unknown location since his ouster, and a court has banned the movement and seized its assets.