LAMPEDUSA- Survivors cried over the coffins of their loved ones on Saturday as Italy denied claims that rescue efforts were delayed in a shipwreck tragedy in which 300 African migrants are feared dead. 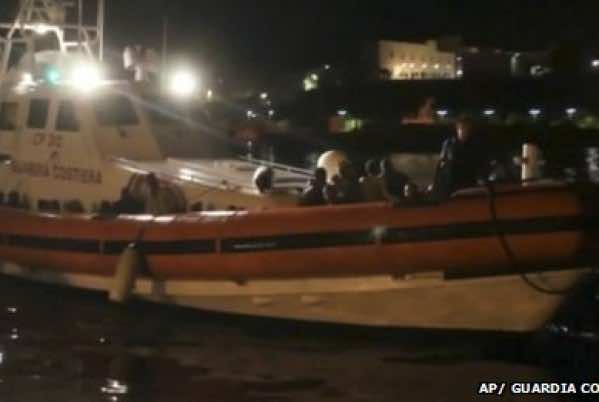 LAMPEDUSA- Survivors cried over the coffins of their loved ones on Saturday as Italy denied claims that rescue efforts were delayed in a shipwreck tragedy in which 300 African migrants are feared dead.

Rough seas around the island of Lampedusa have suspended the search, and controversy has erupted over conditions in which survivors as young as 11 were being housed in an overcrowded refugee centre.

Howls of anguish could be heard from inside a giant hangar at the local airport where the 111 bodies recovered so far were being kept as survivors still in shock paid their respects.

The brown wooden coffins inside were lined up in a row with a rose on each one, and teddy bears placed on the four white coffins of children.

Officials say survivors want bodies repatriated to Eritrea, the country they were fleeing.

Coast guard spokesman Filippo Marini meanwhile rejected as “stupid” claims by a tourist who was the first on the scene of Thursday’s that the rescue was heavily delayed and badly handled.

There were also questions about why radars failed to spot the boat, as dramatic amateur video footage emerged showing a young Eritrean man being hauled aboard a private boat in the chaotic rescue.

“You have to search or 480 people are going to die!” he is heard saying in the video released by Italian TG2 news, before bursting into tears and vomiting sea water, exclaiming “Oh my God!”

Divers have said “dozens, maybe hundreds” of bodies are  still trapped in and around the wreck at the bottom of the sea, while a total of 155 survivors were plucked from the sea.

It is feared the toll could rise to 300 or more, which would make this the worst ever Mediterranean refugee tragedy after a previous one in 1996, also off Italian shores, claimed 283 lives.

“We have a legal but also a moral responsibility to recover all the bodies,” said Leonardo Ricci, a spokesman for rescuers on the island of Lampedusa.

He said there was a “preliminary plan” to raise the wreck filled with corpses from the seabed.

Fishermen from the island, which has a population of just 6,000 and is closer to north Africa than to mainland Italy, took their boats out to sea and laid a wreath to commemorate those who drowned.

Italy has asked the European Union for more help in stemming the influx of refugees, with 30,000 reported to have landed so far this year — more than four times the number for all of 2012.

French Prime Minister Jean-Marc Ayrault called Saturday for a meeting of European countries on border management after the tragic shipwreck.

Italy has asked for the growing refugee influx to be put on the agenda of a meeting of European interior ministers in Luxembourg on Tuesday.

Three more boats carrying nearly 400 refugees from Afghanistan, Egypt and Syria landed in other parts of Italy on Saturday, underscoring the huge scale of the problem.

In Italy there have also been growing calls for an overhaul of legislation against people accused of facilitating irregular immigration, a provision that critics say could penalise potential rescuers.

One of the survivors is the boat’s 35-year-old Tunisian skipper, who has been detained. He is named as Khaled Bensalam in documents seen by AFP.

He was held in April over an earlier landing and deported back to Tunisia.

Local prosecutor Ignazio Fonzo said the inquiry was proving “difficult” because survivors being heard as witnesses were considered suspects under the law and therefore had to be provided with defence lawyers as well as interpreters.

Survivors said they lit a small fire to alert coast guards when the boat, which departed from Libya, began taking on water just a few hundred metres (yards) from the Italian coast.

The fire quickly spread, causing panic, and the boat capsized and eventually sank as its terrified passengers jumped into the sea, which was thick with fuel oil that had spilled from the boat.

Witnesses spoke of hellish scenes at dawn on Thursday and those rescued from the water were almost all naked or bare-chested as they stripped down to try and stay afloat longer.

Forty unaccompanied minors aged 11 to 17 who were among the survivors are being accommodated in a 250-bed refugee centre that is housing around 1,000 people, with many forced to sleep outside.

After touring the centre with a parliamentary group, Khalid Chaouki, a Moroccan-born Italian lawmaker, said: “We found shameful conditions, which are not worthy of a civilised society”.