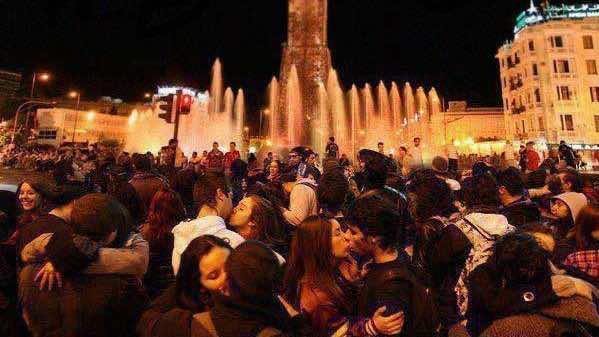 By
youssef sourgo
-
Youssef Sourgo is currently a Master’s student in Linguistic and Literary studies at Ain Chok Faculty of Letters and Humanities.
Oct 5, 2013
Spread the love

Casablanca- The public outrage still has not settled after the recent arrest of two students from Nador for sharing pictures of them exchanging a kiss on Facebook, as well as their photographer.

The arrest of the two students has now attracted international attention, especially after internationally influential news outlets such as Le Monde and BBC reported on it.

Consequently, Moroccans residing in France have decided to organize a demonstration in solidarity with the three students.

According to Le360 news outlet, the said demonstration will consist of a collective exchange of kisses before the Moroccan Embassy in Paris.

The purpose of this demonstration is to support and stand in solidarity with the two students arrested for sharing pictures of them kissing in public. It also aims at condemning the intervention of police authorities and their decision to trial them for what many consider as an harmless act.

The participants in the demonstration are expected to share pictures of them exchanging kisses before the Moroccan Embassy.

Two Moroccans, Zineb El Ghazoui and Ibtissam Lachgar, have already posted pictures of themselves exchanging kisses with their boyfriends on Facebook in solidarity with the two arrested students.