TUNIS- The ruling Tunisian Islamist party Ennahda's pledge to stand down in favour of a government of independents has prompted both relief and distrust among observers and members of the opposition. 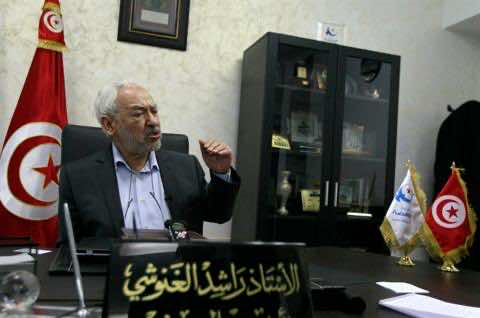 TUNIS- The ruling Tunisian Islamist party Ennahda’s pledge to stand down in favour of a government of independents has prompted both relief and distrust among observers and members of the opposition.

Despite Saturday’s agreement aimed at ending a months-long political deadlock, some already fear that Ennahda may try to renege on the deal.

Saturday’s roadmap signed by Ennahda chief Rached Ghannouchi was brokered to end a crisis sparked by the murder in July of opposition MP Mohamed Brahmi.

The document foresees the nomination of an independent prime minister by the end of next week, who would then have two weeks to form a cabinet.

But already members of Ennahda have played down the scope of thedocument.

Abdelhamid Jlassi, a senior Ennahda official, told AFP that “the date of the government’s resignation will not be determined until the start of the real national dialogue”.

Jlassi said this dialogue will bring all parties to the table at a date yet to be determined, and that sessions planned to start from Monday will be only “preparatory meetings”.

Despite the relief of securing Ennahda’s promise to stand down, and after a two-month boycott of the National Constituent Assembly, opponents of the moderate Islamist party are wary.

“We hear them say one thing and then deny it,” he said, adding that he sees plenty of potential stumbling blocks for the negotiations.

The choice of a new prime minister and his cabinet, the powers the new government will enjoy, the makeup of the new constitution and the dates of elections could all cause difficulties, he said.

Abdesselem said it was vital that the new prime minister be able to act freely for the new government to succeed.

“He needs to be able to name and sack senior civil servants, governors and social housing officials,” he warned.

‘A step forward’
Abdesselem fears that the Islamists are trying to manipulate state institutions.

For months, the opposition has accused Ennahda of slotting party loyalists into strategic positions across the country to help them manipulate the next elections.

Nevertheless, observers of Tunisian politics see Ennahda’s agreement to stand down as a step forward.

Political journalist Mourad Sellami said the crisis could still linger on, but the accord was an admission by Ghannouchi that the stalemate could be resolved only by talking.
“The timetable might not be respected, but they are going to leave power… the reality is that Ennahda is agreeing to make concessions that its activists are not ready to,” he said.

Sellami said it was vital for Ennahda to ensure the adoption of a new constitution along with the transition, so that “at least they can say their mission is accomplished”.

In October 2011, Ennahda won Tunisia’s first free elections, setting up the Constituent Assembly to draft a new constitution within 12 months.

However, the timetable was delayed by one year.

In the meantime, the Islamists were weakened by protracted political wrangling, bitter disputes in parliament, the rise of armed Jihadist groups and economic woes caused by the lack of stability.
Editorials in French-language papers on Sunday said the success of the transition to a government of independents depends not only on the Islamists, but on all political parties.
“Clearly, all political players must not stumble, make wrong moves or transform this new hope that has just blossomed into deception or a dialogue of the deaf,” Tunisian daily La Presse wrote.

Le Temps was critical of the part played in the crisis by all political parties.
“This Tunisian political class shows that we can never be sheltered from a nasty surprise or deception,” it said.

“It has got us used to missing… opportunities for compromise.