Ryad- Saudi Arabia’s Bayan Alzahran is the country’s first female lawyer to be granted an official license from the Ministry of Justice on Sunday. 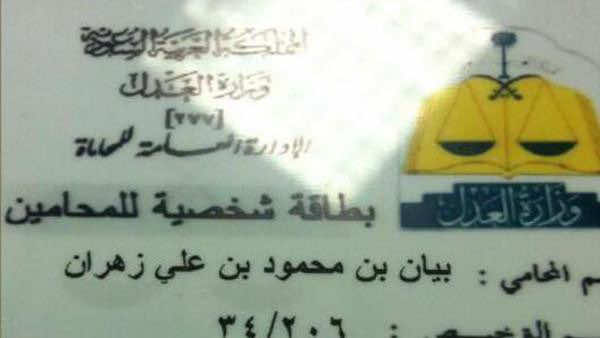 Ryad- Saudi Arabia’s Bayan Alzahran is the country’s first female lawyer to be granted an official license from the Ministry of Justice on Sunday.

Earlier this week, four female lawyers were informed that they will receive their license on Sunday, al Watan quoted ministry sources as saying.

“The license is one of our rights and we did not get it until the systemic conditions were applied as set in Article 3 of the legal system,” Al Zahran told Al Arabiya.

“As we all know our father and biggest supporter King Abdullah is the one who proved us right and lightened our way to the future to serve our beloved country,” she added.

After obtaining the license, Zahran discussed the powers Saudi female lawyers will obtain to practice the profession.
She stated that it is now possible to open an office and receive cases, address them in front of all departments and courts and provide legal advice.

“This license enables us to be recognized in the registrar of practicing lawyers,” Zahran said.

She also pointed out that there will not be any segregation between female and male lawyers under the kingdom’s law.

In April 2013, the ministry of justice registered the first girl as a trainee lawyer and also received a request from another girl to get a license in law.

Meanwhile, official spokesman of the Ministry of Justice Fahd Abdullah Al-Bakran said the number of Saudi lawyers is increasing.

Over 200 lawyers have been registered this year. He lauded the lawyers’ groundbreaking role in serving justice, according to the Saudi Gazette.

Al-Bakran added that the General Administration for Advocacy in the Ministry of Justice is continuing its efforts to complete applications submitted to them, as well as granting the lawyer’s licenses for practicing the profession provided the conditions are fulfilled by the applicants.

Zahran obtained the license after demanding stages and training for three years as a consultant in one of the legal accredited and certified institutions.

She firstly began working around domestic violence and then headed to the issues of financial and criminal prisoners.