CAIRO, Egypt - Gunmen killed five Egyptian soldiers in an attack on an army patrol near the Suez Canal city of Ismailiya on Monday, security officials said. 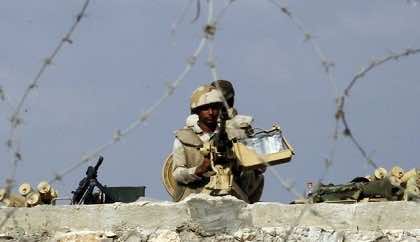 CAIRO, Egypt – Gunmen killed five Egyptian soldiers in an attack on an army patrol near the Suez Canal city of Ismailiya on Monday, security officials said.

The attack took place north of the city, where suspected militants have repeatedly targeted security forces in recent weeks, the officials said.

This came three days after masked gunmen killed two soldiers on a desert road between Ismailiya and Cairo.

The Suez Canal city and the areas around it have seen regular attacks on police and military personnel, especially since the military toppled Islamist president Mohamed Morsi on July 3.

More than 100 policemen have been killed across Egypt in attacks and clashes since Morsi’s ouster.

The military has been conducting an extensive operation in the Sinai peninsula east of the Suez Canal to crack down on Islamist militants, who have killed dozens of soldiers and policemen.