Cairo — Militants in Egypt launched three attacks on Monday, a day after dozens were killed in clashes between security forces and supporters of ousted president Mohamed Morsi. 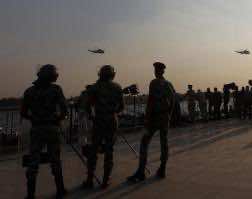 Cairo — Militants in Egypt launched three attacks on Monday, a day after dozens were killed in clashes between security forces and supporters of ousted president Mohamed Morsi.

Two people were killed and around 50 injured when a car bomb exploded outside a security building in Egypt’s Sinai peninsula, security and medical officials said.

Witnesses said the car had been parked outside the main gate of the security headquarters in Al-Tur, the capital of South Sinai.

In the Suez Canal city of Ismailiya, gunmen killed five Egyptian soldiers in an attack on an army patrol.

The officials said one of the rockets left a 25-centimetre (nine inch) breach in a satellite dish used for international phone calls.

The unrest comes a day after clashes between security forces and Morsi supporters which left at least 50 civilians dead.

Sunday’s violence came as thousands of Egyptians took to the streets to celebrate the army that ousted Morsi in July, on the 40th anniversary of the 1973 Arab-Israeli war.