CAIRO- A jihadist group on Tuesday claimed responsibility for an attack on a Cairo satellite communications dish it said was an "infidel mouthpiece" of Egypt's military-installed authorities. 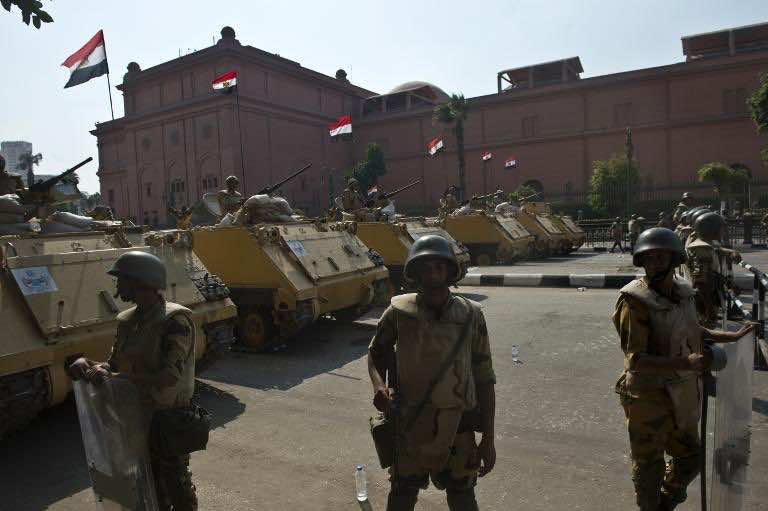 CAIRO- A jihadist group on Tuesday claimed responsibility for an attack on a Cairo satellite communications dish it said was an “infidel mouthpiece” of Egypt’s military-installed authorities.

On Monday assailants fired rocket-propelled grenades at the dish in Cairo’s upscale Maadi district, a day after clashes between Islamists and the security forces killed at least 57 people in Egypt — 48 of them in the capital alone.

“Your brothers in Al-Furqan announce the targeting of the headquarters of communication, the tongue of the pharaohs, with two RPGs so that the media of the infidels know we are coming,” the group said in a YouTube video showing footage of the attack.

“Your enemy is the enemy of God and its officers and soldiers who are killing you are like soldiers of the pharaohs. They are infidels until they return to the religious path,” the group said in a statement.

“Today, we call for jihad. It is the start of the road to victory and martyrdom,” it added.

The footage shows the dish from different angles, followed by masked men dressed in black and getting ready to fire the RPGs during the night. Theauthenticity of the video could not be verified independently.

It was the first attack using RPGs in Cairo since violence erupted in the capital after the army ousted Islamist president Mohamed Morsi in a popularly backed coup on July 3.

The Al-Furqan group had previously claimed an attack on a ship in the Suez canal in September.

Egypt’s new authorities have launched a crackdown against Islamist supporters of Morsi, jailing more than 2,000 of them, including the former president.