INEZGANE, Morocco - Quality tour guides can add much value to your visits to cultural or historical sites and monuments. They can vividly bring back historical events in an informative as well as an entertaining manner. 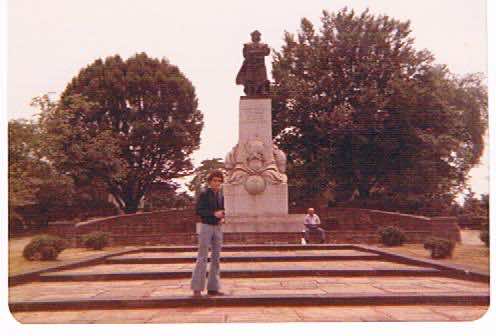 INEZGANE, Morocco – Quality tour guides can add much value to your visits to cultural or historical sites and monuments. They can vividly bring back historical events in an informative as well as an entertaining manner.

My path happened to briefly cross that of two brilliant tour guides in Washington, DC. The first tour guide was a retired University professor with whom we (visitors) took a ride on a tour-mobile that took us round monuments and attractions centers in the capital city of the USA. The second tour guide was a fascinating lady, a retired judge, who took us through a guided tour of the library of Congress. Both tour guides seemed highly educated and cultured professionals.

The university professor told us he was doing the job of tour guide and driver as a post retirement job while the lady at the library of Congress pointed out she was doing the tour guiding as voluntary service. The tour-mobile guide showed us Washington DC from without while the library of Congress lady showed us an important part of Washington DC from within. It may take me quite a while to relate everything but I will focus on things that captured my attention, responded to my curiosity or else catered for my thirst for discovery.

Let me start by the Columbus Memorial in front of Union Station in Washington, DC. The memorial stands in the middle of the traffic circle in front of Union Station. It is a work of art that was designed by Daniel Burnham and sculpted by Lorado Taft. Unlike the Columbus statue in Pittsburgh (photo) that stands erect on a high pedestal, this memorial is an elaborate combination of representations and symbols. I had a close look at the memorial while on a tour listening to our professor guide.

The Columbus figure, we were told, was looking ahead to the future or into the post 1492 AD era. To the right of Columbus, a Native American figure is facing west and anxiously looking in anticipation to the enigmatic new comer. The Indian figure symbolizes the new world and its peoples. On Columbus’s left there is a figure of a white elderly man facing east. The figure seems to have taken no notice either of Columbus or his achievements. The man facing east symbolizes the world left behind or the pre 1492 AD era. On top of the main shaft of the memorial, there is a representation of the western hemisphere guarded by four eagles, each on one side and connected by garlands. On either side of the Columbus memorial there is an imposing figure of a lion. The lions symbolize the exceptional courage Columbus had to brave the waves and the stormy waters of the Ocean to make it to the other side of the Atlantic.

To complete the representational elements of the legendary mission of Columbus, there are three flag poles with eagles perching on spheres and spreading their wings. The three poles represent the three ships (The Nina, the Pinta and the Santa Maria) Columbus used for his discovery voyage of the new world. The American dimension of the memorial lies in the American flags that float on the poles as well as in the eagles that symbolize freedom and liberty. The whole combination of representations and symbols is crowned with the folded arms and the focused gaze of Columbus into the future.

In the US, October 12th is Columbus day, a holiday that is rather controversial. It is celebrated by some Americans and not observed by others who believe it set the scene for the downgrading of the history and culture of the Native peoples. For most people in the American continent, Christopher Columbus remains a symbolic icon of the new world. Many towns, cities and institutions throughout the continent are named after him. In the United States, the capital of Ohio State, Columbus, bears the name of the explorer. Universities and other institutions are also named after the Italian explorer. His discovery of the new continent was a landmark and turning point in human history with such tremendous impact on the world’s vision of itself.

The explanations our guide provided us were very important in the sense that they showed us the world from a different perspective. The vaults in the library of Congress had such an elaborate system of ornamentation and murals that depicted seasons, muses, senses, knowledge, wisdom and so forth. In the visitors’ gallery you could see the dome over the main reading room with the famous twelve figures representing different civilizations that contributed to world civilization. Arabia, one of the civilizations is displayed with its past contributions to exact sciences.

America is represented by an engineer with his hand tucked under his chin apparently trying to find a solution to a mechanics problem. With the American figure the focus is no longer on the past; it is more on the coming of age of the new American nation. Most of us were eager to have a look at the library operating system and the books and other materials but we could not as we had no passes to do so. A close family relation and expert at the Moroccan “Centre national de documentation” had a special visit to the library of Congress within the framework of cooperation between Morocco and the United States in the field of libraries and documentation and learned more, but I can only write about my modest experience. I have selected these two views on Washington, DC for you; one from without and the other from within with the hope of bringing certain aspects of American cultural life closer to readers of my journals.