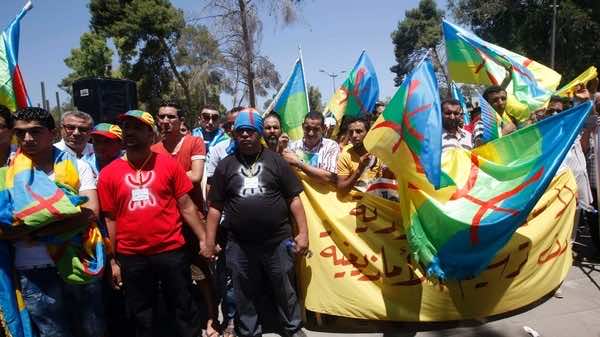 In his essay  entitled “Morocco: Notes on The  Chauvinist Amazigh Discourse” Saad Eddine Lamzouwaq attempted to bring evidence, proving that  some of the key figures who belong to  the Amazigh  Movement and some of  its leaders hold chauvinist views. Leaving the question of whether he was right or wrong aside, the heart of this essay rather looks to  demonstrate  the numerous  old-fashioned ideas and fallacies  revealed in  Lamzouwaq’s essay.

Initially, I want to confess that I have nothing against Arabs and democratic pan-arabists as long as they defend their own identity in its historical borders where it was constructed. But as long as the chauvinist pan-arabists drag Amazigh identity in the so –called “Arab nation” –that does not exist–there will be little dialogue or discussion with such racist people.

Millions of Moroccans identify themselves as Arabs. I think that as long as they do not tend to impose their ‘identity’ on the rest of the Moroccans, they are free to identify themselves the way they like. But truth to be told, I am convinced that the Arabs who settled in Morocco long ago melted into Amazigh societies, as history teaches us. Despite this historical fact, this does not mean that no traces were left on the Amazigh identity when Arabs settled throughout the Maghreb. Doubtless, this is the reason behind the presence of the Arabic language and culture in our beloved country.

How can Morocco be a part of the Arab world?  The answer to this question is because the ones who come to power when the country gained its independence, were absolutely chauvinist pan-arabists, having studied in the Arab countries where Arabism, as an ideology, was at the height  of it  power. In this sense, some of the “Moroccan Arabs” were influenced and inspired by this racist ideology as they went as far as considering Berbers of Yemenite origin when they dominated the post-independence Morocco. But what is so dangerous is the fact that Moroccans who happened to study in such countries took the same dominant pan-arabist ideas and imposed on them in the Moroccan context, forcing them into effect.

The idea that “the Arab world is a geographical area which encompasses counties whose inhabitants mostly, or in large numbers speak different dialect deriving from classical Arabic” does not enter one’s head, because North African countries do not speak any of the classical Arabic dialects. People who still say this have not taken the trouble of conducting just a bit of research concerning this point.

The dialects spoken in North African countries are greatly influenced by Tamazight, Arabic, French and Spanish languages. If Moroccan dialects, for instance, are not influenced by Berber language, then why   do ‘Aljazeera’ and Alrabiya” TV channels  translate  what   Moroccan  people  say  when  they  speak Moroccan  Darija ? Is it not strange  that  Moroccans  speak dialects derived from  classical Arabic while Gulf countries population , whose mother tongue is Arabic,  cannot understand what their ‘descendants’ say when speaking?

Logically speaking, since Moroccans and Gulf populations share the same “code”, as claimed, they will easily understand each other in the process of communication, but the truth is that Moroccans do not speak Arabic.

Regardless of what ideology Moroccans adopt, most Moroccans financially support Palestine when Israel aggressively attacks Palestinians. “These moments of solidarity” are mostly based on ‘blood’, not on humanitarian intentions. I will go so far as to say that the Moroccan government “robs” its citizens and sends the money  to build hospitals and schools in Palestinian territories, while some Moroccans, especially in isolated areas, have no access to either education  nor health care.

Supporting other countries based on humanitarian reasons is a good idea to cement Moroccan relations with these countries. However, I myself will object to the idea of sending “generous donations” to other countries if young children and pregnant women die of cold and extreme poverty in my country. One could hardly see a hospital in such forgotten Moroccan territories. How would you call a person who donates money to his sick neighbour at a time when one of his family members is dying?  Those who were terribly massacred in Burma were humans as well. Paradoxically, Moroccan government officials remained silent.

When it comes to the Israeli-Arab conflict, it would be too ridiculous to say that Amazigh Movement figures failed to show their support for Palestinians, bar Edgharni. In this respect, the question asked by many is why Amazighshould be dragged into issues termed Israeli- Arab conflict?

Supposing some of the “key Amazigh figures” are against Moroccan financial support for Palestinians, this should never be used as an excuse to send them out of their country into exile, given the reason that many are the “Moroccan Arabs” who openly and clearly expressed their antagonism towards all that is connected to the Amazigh community. A striking example in this vein is Al Jabri who stated that “Tamazight varieties should be killed and burned.” What is funny in all this is that Aljabri is considered to be one of the great “Arab” thinkers and philosophers. What kind of philosopher is he? What would “Moroccan Arabs” say   if I said that the Arabic language should be forced to vanish? How would you feel in such a case? I just want to know why non-Arab peoples have no place in the attitude of chauvinist pan-arabist?

As far as Arab chauvinism is concerned, the very first article of the first Moroccan constitution that was influenced by this chauvinist and racist ideology made it clear that:

Morocco is an Arab country and its official language is Arabic.

The ones who were not Arabs, according to this article, should either accept Arab identity or pack their luggage and leave the county. I do strongly believe that this is enough proof to distinguish fake chauvinist from its more genuine version.

Not only this, but some of the Arab chauvinists belonging to “the Party of Independence” attempted to pass a bill in the Moroccan parliament, with the effect of making it illegal for Tamazight-speaking Moroccans to speak Tamazight in public places, not to mention that Arabic was and still is the only allowed language to speak in the courts of the Moroccan kingdom. Who is the real chauvinist, then?

The Amazigh “component,” in the mind of the Arab chauvinist, is a threat to national unity. The moment you speak about Tamazight  or Amazigh identity, the moment you are cursed on the ground that you are  trying to split the country, or, at the best of times, they would say that  Arabic is the language spoken in Heaven. Hence, the Tamazight language is insignificant when compared to Heaven’s language.

Some of the Amazigh, including its cultural movement, reject the label of the “Arab spring.” Why is this so? The answer is because other peoples and nations were involved in those uprisings. In other words, calling it “Arab” is misleading. Chauvinists object to this idea as they stress that Arabs were the only ones who took to the streets and toppled the dictators. By hooks or by crocks, these uprisings must be termed ‘Arab spring’ instead of a “democratic spring.” Otherwise, civil war is on edge. I am of the opinion that this label should be removed from our national media if we are to respect the different other.

The fact that North African populations speak one of the dialects derived from classical Arabic is not true either. These Arab chauvinists have forgotten that Tamazight is said to be the most used language in North Africa, so why not term North African states Amazigh countries in accordance with the history and language they share?

To conclude,   putting “one’s people” on a pedestal is one of our deeply rooted social ills. We must fight against Arab jingoism because it seeks to disregard Morocco’s history, culture and language.