CAIRO - Egypt's military chief Abdel Fattah al-Sisi left the door open to a presidential run in elections next year, telling a paper published on Wednesday it was up to "God's will". 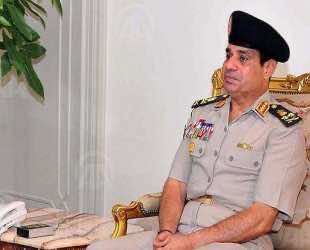 CAIRO – Egypt’s military chief Abdel Fattah al-Sisi left the door open to a presidential run in elections next year, telling a paper published on Wednesday it was up to “God’s will”.

The general is easily the county’s most popular political figure after he ousted president Mohamed Morsi and appointed an interim government in July, in response to mass protests demanding the Islamist’s resignation.

“The matter you speak of is tremendous and significant,” Sisi replied when asked in an interview with Al-Masry al-Yom whether he would stand for president.

“But I think the time is not right to ask this question, given the challenges and dangers facing the country which require we focus our efforts on achieving the plan for the future,” he said.

The newspaper added that Sisi fell silent before reciting a Koranic verse loosely translated as: “And God’s will prevails.”

Several former presidential candidates who lost out to Morsi in elections last year have said they would support Sisi if he stood for president.

According to the interim government’s timetable, parliamentary and then presidential elections are due to be held by mid-2014.