OTTAWA - Canada's top court will be one judge short when it begins hearing a key national security case on Thursday after an unprecedented legal challenge scuttled a new justice's appointment. 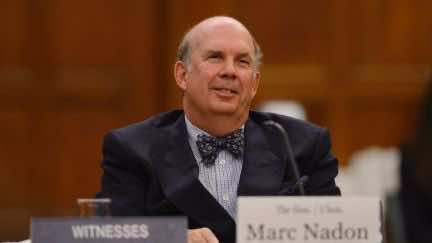 OTTAWA – Canada’s top court will be one judge short when it begins hearing a key national security case on Thursday after an unprecedented legal challenge scuttled a new justice’s appointment.

Justice Marc Nadon, a passionate voice for the government’s controversial anti-terror measures in the past, stepped aside temporarily on Tuesday, one day after being sworn in.

That will leave only eight out of nine justices available for the upcoming schedule, and not the full bench hoped for by the government.

Nadon’s appointment by Prime Minister Stephen Harper was challenged by a Toronto lawyer, Rocco Galati, on a technicality.

Galati contends that Nadon is not eligible to take the vacant seat on the Supreme Court, as it is one of three reserved for Quebec judges or lawyers.

Nadon, 64, practised law for 20 years in the Canadian province, which is unique in Canada for adhering to a French-heritage codified civil law, instead of common law. But for the past two decades he has sat on the Federal Court.

The government countered with a legal opinion from a retired Supreme Court judge that found it unreasonable for Nadon to resign from the bench, then rejoin the Quebec bar for a day to qualify.

On Thursday and Friday, the Supreme Court will hear arguments in the case of a former Ottawa pizza delivery man declared to be a security threat with links to Al-Qaeda.

Mohamed Harkat, 44, was first detained in 2002 on suspicion of ties to the global terror network and spent nearly four years in jail under a rarely-used national security measure before being released under strict bail conditions.

His lawyers will challenge the constitutionality of the so-called security certificates, that allow secret court hearings and indefinite jailing without charge of foreigners suspected of terror ties.

The hearing will be the first major test of Canada’s revised security law since the original was struck down in 2007 as unjust and parliament rewrote it to ensure better legal representation of defendants.