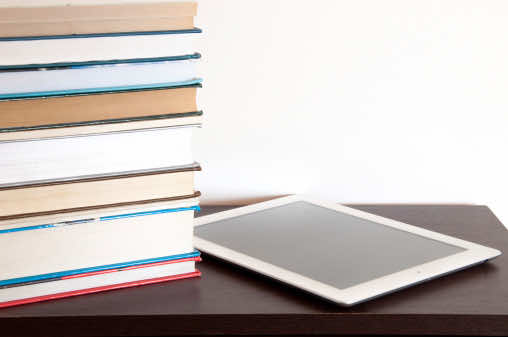 Agadir – Have you ever asked yourself whether you read on-screen the same way you do on print? For instance, do you think that the process of reading this article on your computer will be equivalent or different if you read it on paper? Do you think the platform on which you read changes your reading speed, motivation, or even your comprehension? In other words, how exactly does the technology we use to read change the way we read?

A lot of things have changed in our lives since the onset of ICT (information communication technology), and reading is no exception. People nowadays spend more time in front of their computers, laptops, and tablet computers than even before. There is notable evidence that people in general, and young people in particular, are doing more screen reading of web-based materials. There are even people who talk about the coming death of paper-based publications, speculating that one day all the works will be born digital.

After all, one can claim that the mere change is in the medium. Well, this allegation is both misguided and misleading. Researchers and reading specialists have proved that on-screen reading is absolutely different from the digital one. The question is whether this dissimilarity has a positive or negative influence on our reading process. As a matter of fact, different stances from a number of reading specialists have emerged so far. Dillon (1994) conducted a study in which he found out that reading was some 20 to 30% slower from a computer screen than from paper. Many studies such as the ones conducted by Muter et al, (1982), Wright and Lickorish, (1983), and many others supported this conclusion. Accordingly, we can deduce that by the time you will have finished reading this article on your screen, you could have read more than one article on print!

In the same vein, Naomi S. Baron (2011), a professor and researcher at the American University, came up with different drawbacks of on-screen reading such as the loss the physicality of the book, multitasking, and lack of concentration. I partly agree with the professor’s conclusions for I often tend to find myself bound to stop my reading process so as to answer a Facebook message or check my email. How often do you check your Facebook, Twitter, email, or another website while reading on-screen? In addition to this, the physicality of the book is another vital trait that is lacking in digitalized texts. Naomi S. Baron wrote these impressive lines criticizing digital reading: “It’s not a book. It doesn’t have a smell, you don’t touch it…, you’re plugged into the internet, you can’t concentrate, it hurts your eyes, and you lose the beauty of the words behind this screen. Life itself is in hard copy. … Not this treacherous digitalism, which has permeated our lives and our reality.”

There are even researchers, like Nielsen (1997), who claim that “Reading” is not even the right word to describe how we process hypertexts! He stated that we rarely read screen pages word by word; what readers do instead is just “picking out” individual words and sentences. As well, Heppner (1985) analyzed the results of a reading test displayed by computer vs. Print and detected that reading performance scores were significantly better on the print form.

Notwithstanding, onscreen reading is not that bad! This is not the conclusion I want you to draw from this article. Recent findings such as the ones conducted by Bolanos (2009), Mason (2001), and Weinberge (2001) reveal that the level of comprehension is equal regardless of the form of the text.

In response to professor Baron’s quotation cited above, I would say that it is true the screen is not a book, but through the screen one can have access to countless hyper-books that are for the most part unaffordable. It is true the screen doesn’t have that unique smell that old books have, but I do touch my laptop, I can feel it, and I can concentrate. It does sometimes hurt my eyes, but I still sense the beauty behind the screen. It is intriguing and it becomes part of our lives, at least to digital natives’ lives. And who says we can’t highlight or jot down ideas and comments while reading on-screen. People can now save their PDF files with their notes and highlights included. No worry about that!

Furthermore, screen reading is obviously not something that one can do without nowadays. The move from the page to the screen is evolutionary and inevitable according to Ellen (2011).  A recent study carried out by the UK National Endowment for Knowledge has revealed that Fifty percent of pupils (between the ages of sixteen and eighteen) opt for reading on screens whereas thirty percent still prefer reading paper books.

Unlike the first standpoint that criticized on-screen reading, many researchers in the arena contrarily affirm the positive influence of the latter on readers. Coiro (2003) described web-based texts as having three main criteria, which are being non-linear, interactive, and having multiple media forms. She stated that electronic texts are introduced with a set of interactive features that are not available in conventional print. According to her, the hyperlinks encourage readers to investigate their own path in a nonlinear way that may be different from the path of other readers. Thanks to the availability of a variety of electronic texts, students become actively engaged with the text in ways that are personally relevant to them.

In the same regard, Grams (2003) investigated students’ motivation in reading by providing each participating student access to a warless learning device. He concluded that all students seemed to be reading E-books faster. Rosalia (2002) also recognized this when she stated that technology attracts large number of young people. “Today’s students are the first digital generation fully comfortable with technology as a way of life,” she says.

In short, the debate of screen vs. Paper is long and intricate. Broadly speaking, we can talk about two inconsistent schools of thought. The first one favors the traditional form of reading texts believing that it is quicker, healthier, and more beneficial than reading on screens. Paper cannot and should not be replaced by screens.  Contrariwise, the second school supports digital reading for they believe that young people are more positive towards it than paper, such as Horton and Lovitt (1994) and Hallfors et al (2000).  There are many more interesting studies from the tow schools that decidedly deserve to be scrutinized.

So, which medium is better?  Which medium makes us “smart”?  Which medium should educators encourage? These are very critical questions that need an answer.  Definitive conclusions cannot be drawn. Richard C. Anderson (2003), the director of the Centre for the Study of Reading, stated that studies investigating the quality of comprehension and comprehension strategies in web-based environment are too limited. Therefore, more studies should be conducted, and more pedagogical recommendations based on experimental evidence needs to be asserted in this regard.