RABAT -  Belgium archaeologists said they have found more than 2000 Incan and Tiwanaku treasures in the depths of Lake Titicaca in Bolivia.

By
Loubna Fouzar
-
Loubna Fouzar is a photographer and journalist student in 3rd year at ISIC.
Oct 9, 2013
Spread the love

RABAT –  Belgium archaeologists said they have found more than 2000 Incan and Tiwanaku treasures in the depths of Lake Titicaca in Bolivia.

Pieces made from gold and sculptures were shown off at a news conference at the Ministry of Culture and Tourism on Tuesday in La Paz in front of Evo Morales, the Bolivian President. 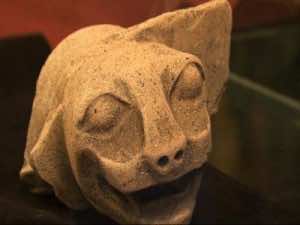 The expedition began two months ago on the Bolivian side of lake Titicaca, which is shared with Peru. Underwater explorations turned up objects from different eras, both Inca era and pre-Inca (1438-1533).

“There are ceramics and urns from more than 500 to 800 years ago,” said Christophe Delaere, the Belgian co-director of the Huinaimarca Project that unearthed the items.

“Not only has the lake conserved some of the pieces, like the ceramics and gold but it has also protected this heritage,” Delaere explained.

Among the pieces found are precious stones, gems usually found in Ecuador and objects thought to come from Chile, which leads the team to believe that there were commercial and cultural links between civilizations before the arrival of the Spanish.

Evo Morales expressed that he wanted Bolivia to recover its archaeological heritage which, he said, “had been stolen by foreign countries.”