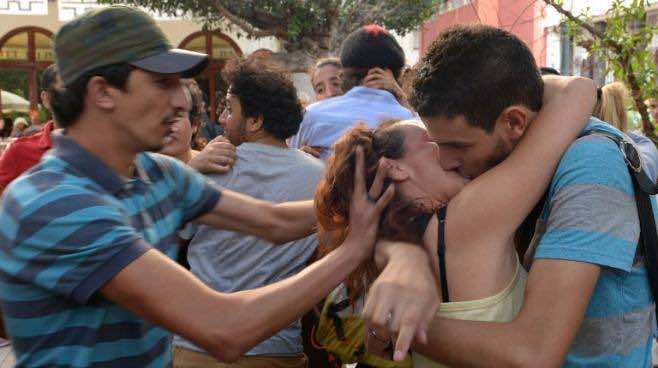 RABAT- The trial of three teenagers for posting photos of themselves kissing on Facebook has sparked a storm of online protest in Morocco, where conservative Muslim values are being challenged on the Internet.

The offending couple, a boy and a girl aged 15 and 14, and their 15-year-old male friend who took the photos outside their school in the northern town of Nador, were arrested last week.

The arrests immediately triggered a wave of online support, with activists posting pictures of couples locking lips and calling for protest “kiss-ins”, and the judge ordered that the teens be released on bail three days later, ahead of their trial on Friday.

“Activists agitating on Faceboook are a potent force because they can get media attention, sometimes abroad, and can shake the conservative values both of society and the state,” he added.

“As a result, the authorities review judicial decisions and sometimes challenge them, as happened in the case of the Spanish paedophile” mistakenly freed in July by King Mohamed VI.

Faced with public outrage at the decision to free convicted child rapist Daniel Galvan, along with dozens of other Spanish nationals jailed in Morocco, the royal pardon was hastily revoked, with the palace insisting the king had been unaware of the nature of Galvan’s crimes.

Underlining the growing power of social media, US NGO Freedom House said last week that 55 percent of the Moroccan population regularly accessed the Internet in 2012, the highest penetration rate in Africa, up from 21 percent
in 2007.

On the eve of Friday’s trial, hundreds of Moroccan online activists renewed their demands that the charges against the three teenagers, of “violating public decency”, be dropped.