THE HAGUE- The International Criminal Court on Friday ruled that Libya can try slain dictator Moamer Kadhafi's former spy chief, having previously demanded he be handed over to The Hague. 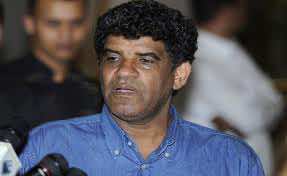 THE HAGUE- The International Criminal Court on Friday ruled that Libya can try slain dictator Moamer Kadhafi’s former spy chief, having previously demanded he be handed over to The Hague.

Because Abdallah al-Senussi is being tried in Libya, ICC judges “concluded that the case is inadmissible before the court, in accordance with the principle of complementarity,” it said.

The ICC stressed that the Senussi decision had no bearing on the case against Kadhafi’s son Seif al-Islam, who is still wanted in The Hague.

Kadhafi’s former heir apparent and others including Senussi are accused of crimes during the revolt against Kadhafi two years ago.

Judges ruled that “the case against Senussi is currently subject to domestic proceedings conducted by the Libyan competent authorities and that Libya is willing and able genuinely to carry out such investigation.”

The ICC’s founding document, the Rome Statute, says that the ICC cannot carry out proceedings against a suspect if they are receiving a fair trial in a domestic court.