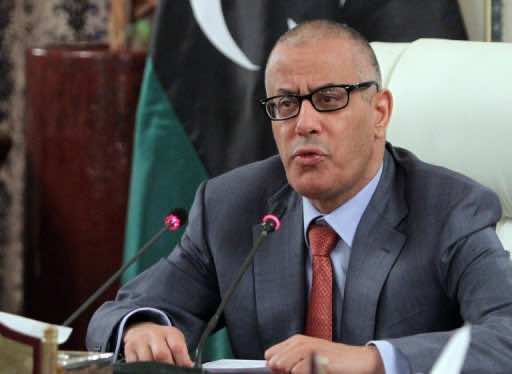 “I do not think that more than 100 armed vehicles can seal off the hotel district (in Tripoli) to people without a command being given,” he said in a televised address.

“This bears the hallmarks of an attempted coup d’etat against legitimacy,” said Zeidan, who was abducted on Thursday from the Corinthia hotel, where he had been living for several months for security reasons.

The assailants had presented the hotel with a fake arrest warrant allegedly issued by the prosecutor general.

Zeidan said “a political party” was behind what he termed the “criminal and terrorist act.” He appeared to be referring to the Justice and Construction Party, the political wing of Libya’s Muslim Brotherhood and other Islamist blocs.

The prime minister, regarded as a liberal, said the unnamed party had tried but failed earlier in the week to garner enough votes in the National General Congress, Libya’s highest political authority, to have him dismissed.

“When they failed to bring down the government through democratic means, they resorted to the use of force.”

Zeidan said his political detractors had blocked legislation on a national budget and efforts to establish a new army with the aim of “pushing the country towards chaos.”

Zeidan was kidnapped just days after US commandos angered the government by capturing senior Al-Qaeda suspect Abu Anas al-Libi on the streets of Tripoli and whisking him away to a warship in the Mediterranean.

The capture of Libi embarrassed the government, which claimed no prior knowledge of the operation, and Tripoli has come under increasing criticism, notably from former rebels.

One such group, the Operations Cell of Libya’s Revolutionaries, said earlier this week it was on high alert “in light of the deterioration in security and damage to the country’s sovereignty by foreign intelligence bodies.”

It blamed Zeidan for Libi’s capture and said it had “arrested” the premier on Thursday.

But later, the Brigade for the Fight against Crime, a police division made up of former rebels, said it was holding Zeidan.

The government said it suspected both groups, which are loosely connected to the defence and interior ministries, of being behind the abduction.

A car bomb set off a loud explosion Friday in front of the Swedish consulate in Benghazi, causing serious damage but no casualties, Colonel Abdullah Zaidi said.

The Swedish mission is one of the few remaining diplomatic offices remaining in the eastern city of Benghazi, which was the cradle of the uprising but now frequently sees attacks on security forces.

The Swedish mission is not far from the Egyptian consulate, which was bombed in August.

The worst attack was on September 11, 2012, when armed men assaulted the US consulate, killing ambassador Chris Stevens and three other Americans.

Such attacks are routinely blamed on Islamists, but have never been claimed. No group has yet claimed the attack on the Swedish consulate.

Two years after the revolution that toppled Kadhafi, Libya’s new authorities are still struggling to rein in tribal militias and groups of former rebels.

Public anger in Libya is growing as widespread violence — including assassinations — proliferates, particularly in the east of the country.

Many Libyans blame political rivalries for the problems plaguing a country awash with militias and weaponry left over from the 2011 war.