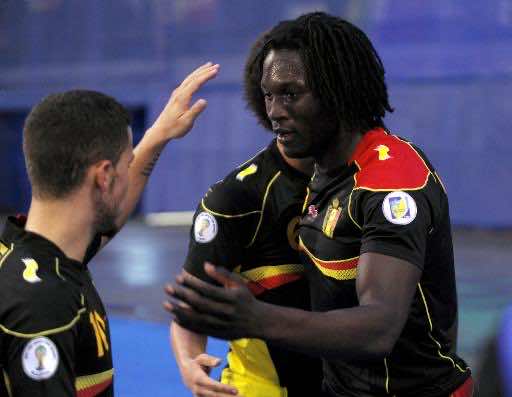 Belgium, who last made the global showpiece in 2002, topped Group A thanks to their impressive win in Zagreb and join Italy and the Netherlands in Brazil next summer.

Lukaku made it 2-0 after 38 minutes despite Letikosa saving his first attempt.

Croatia substitute Niko Kranjcar beat Thibaut Courtois in the Belgian goal with six minutes left but the home side couldn’t find another goal and must now hope to make the finals via the play-offs.

“Belgium can be very proud of this team. We are going to Brazil and will try and have a great tournament,” said Belgium’s Manchester United star Marouane Fellaini.

“In this new generation of players, there is technique, maturity, physicality and they are also warriors.”

They lead Group G by three points from Greece who were facing Slovakia.

Bulgaria’s hopes of finishing runners-up to Italy in Group B suffered a setback when they lost 2-1 to Armenia in Yerevan.

Denmark then drew 2-2 with Italy while the Czech Republic beat Malta 4-1 to leave all three sides in the play-off shake-up.

Three-time champions Germany need just a point against the Republic of Ireland in Cologne to reach the finals.

Joachim Loew’s side have a five-point lead over Sweden in Group C having won seven of their eight qualifiers so far.

Switzerland, who famously defeated Spain in the group stages of the 2010 finals in South Africa, can make sure of their place in Brazil when they face Albania in Tirana.

The Swiss have a five-point lead in Group E over Iceland, as well as a vastly superior goal difference, with two matches left.

Russia were beaten by Slovenia in the play-offs for the 2010 tournament, but they lead Group F by a point from Portugal.

Fabio Capello’s Russia go to Luxembourg where a victory will put the pressure on Portugal to get all three points at home to Israel to avoid the play-off lottery.

England started the evening in the driving seat in Group H, leading Ukraine and Montenegro by a point.

Roy Hodgson’s England were facing Montenegro at Wembley but Ukraine, unbeaten for a year, beat Poland 1-0 in Kiev thanks to a 64th minute strike from Andriy Yarmolenko to take top spot, if only temporarily.

“It was a match in which the result was much more important than the quality of play,” said Ukraine manager Mikhail Fomenko.

Defending champions Spain are locked on 14 points with France in Group I but have a game in hand.

They face Belarus in Mallorca where a win combined with a draw against Georgia next Tuesday will be enough for Vicente del Bosque’s men.

The nine group winners all qualify for the 2014 finals while the eight best runners-up will play off for the remaining four spots.