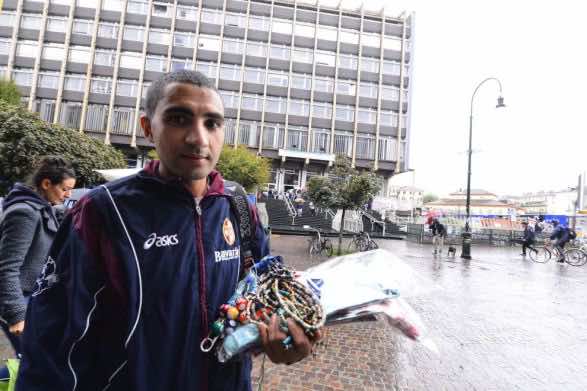 Rabat- An unbelievable “From zero to hero” success story of a Moroccan young man is recently making the headlines of the Italian press. Rachid, a 26-year old, who just obtained a doctorate in engineering, became an Italian sensation given the outstanding path he went through to achieve such a high academic degree. A path financed by the money he got from several years of selling tissues and lighters in the streets of Torino.

Rachid Khadiri Abdelmoula, a Khouribga native who obtained his degree from one of the best Italian universities, the Politecnico di Torino, is a true example of Moroccan perseverance and eagerness.

No Pain No Gain

Rachid came to Italy when he was 12 to join his two older brothers who were already there for quite some time.

In 1998, he arrived in Italy after crossing the Strait of Gibraltar and traveling overland to join his brother. His intention was to work to support his family back in Morocco. However, his two brothers who were already working decided that he should go to school instead.

As soon as he finished high school, the work appeal began to strike back. Rachid wanted to drop out from school and to have a full time job. But, his two brothers encouraged him to go even further. His destination was Politecnico di Torino.

The young Moroccan worked part-time as a street vendorto finance his schooling. Later, he received two scholarships, which he lost very quickly at the beginning of the economic crisis that engulfed Italy. The money shortage forced to work even harder and for long hours, which nearly cost him to fail school.

Rachid classmates were astonished when they found out that he was selling lighters and newspapers to finance his studies.

“They were shocked”, he said in an interview with Italian newspaper La Republica.

“The sweetheart” of Italian media had to endure racism and violence in numerous occasions.

“I was once insulted and attacked by a group of racist teens. They stole my merchandise. But what hurt me the most was when bystanders did not intervene”, he told La Republica.

However, he received acknowledgment from a place he did not expect, namely the Lega Nord or the North League, a political party notorious for its anti-migration policies and leanings.

“Rachid is an example of commitment and good will”, says Fabrizio Ricca Leader of the Party for La Republica.

Rachid is indeed an example for all the Moroccan youth that hard wok and determination are the way to go. Nothing is coming by chance.