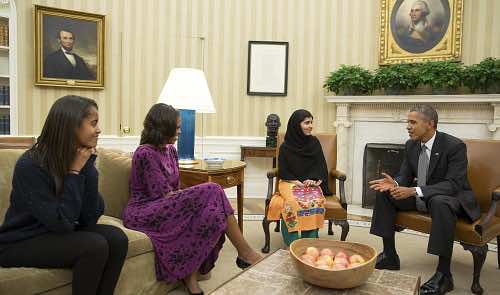 “The United States joins with the Pakistani people and so many around the world to celebrate Malala’s courage, and her determination to promote the right of all girls to attend school and realise their dreams,” a White House statement said.

According to the statement released following the meeting in Oval Office, “We salute Malala’s efforts to help make these dreams come true,” said the President.

Also the US president said in his proclamation to mark the International Day of the Girl, “Across the globe there are girls who will one day lead nations, if only we afford them the chance to choose their own destinies.”

The First Lady added: “Investing in girls’ education is the very best thing we can do, not just for our daughters and granddaughters, but for their families, their communities, and their countries.”

Malala and two of her friends were attacked in Pakistan’s northwest Swat Valley when she was 15 years old.

She sustained a gunshot wound to her head. She was airlifted for treatment to the UK where she now attends school.

The UN had declared her birthday “Malala Day,” but she said it was “the day of every woman, every boy and every girl who have raised their voice for their rights.”