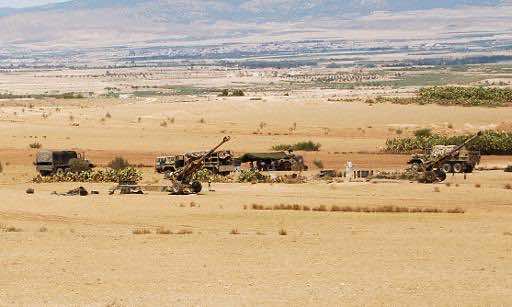 KASSERINE, Tunisia-Tunisian security forces and suspected jihadists have clashed near Mount Chaambi, a stronghold near the Algerian border of militants linked to Al-Qaeda, a security source said Saturday.

“The clash took place last night (Friday) as an anti-terrorist brigade moved in to arrest jihadists at Karma” in the Kasserine area, the source told AFP.

He said the hour-long firefight came as government forces assaulted a house thought to contain Mourad Gharsalli, the number two of a group in the Chaambi area that security forces have been hunting for months.

They were acting on a tip-off that Gharsalli had emerged from hiding to visit relatives, the security source added. The house was partly destroyed in the assault but the jihadists managed to escape, leaving behind a phone and some ammunition.

Reinforcements were rushed to the area and a security sweep was under way on Saturday, the source said. Media reports said a jihadist group had been surrounded at Jebel Semmama near Mount Chaambi.

“Army and national guard reinforcements have been sent in, which could mean a large-scale operation” against the militants, Mosaique FM radio reported. Since December last year, security forces have been tracking an armed group thought to be linked to Al-Qaeda in the Islamic Maghreb (AQIM) in the Chaambi area.

The group is linked to Tunisia’s main Salafist movement, Ansar al-Sharia, which has been accused of liasing with Al-Qaeda and murdering politicians Chokri Belaid and Mohamed Brahmi this year.

Ansar al-Sharia’s leader, Saif Allah Bin Hussein, a former Al-Qaeda fighter in Afghanistan known as Abu Iyadh, is accused of orchestrating a deadly attack on the US embassy in Tunis last September and has been on the run ever since.

He is thought to be holed up in the Chaambi area where some 15 soldiers have been killed in jihadist shootings or bombings in recent months.

Since the 2011 revolution that overthrew Zine El Abidine Ben Ali, Tunisia has been rocked by violence blamed on radical Islamist groups that were repressed under the former strongman.