RABAT- A few dozen Moroccans staged a symbolic "kiss-in" Saturday in support of three teenagers arrested for posting pictures on Facebook of two of them smooching. 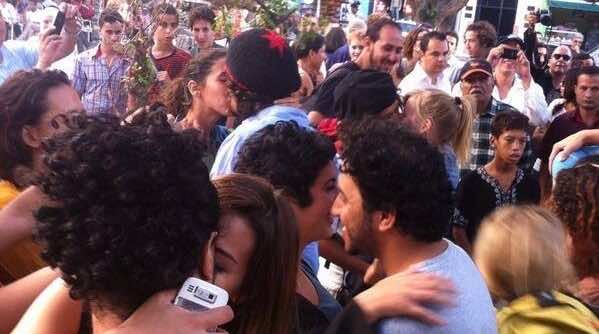 RABAT- A few dozen Moroccans staged a symbolic “kiss-in” Saturday in support of three teenagers arrested for posting pictures on Facebook of two of them smooching.

Only around a dozen couples actually locked lips in the gathering outside parliament, but the demonstrators insisted they had defended the right to public displays of affection in Morocco’s conservative society.

The kissing case has sparked uproar online, with netizens protesting against what they see as creeping conservatism in the Muslim country long known for being relatively liberal and tolerant.

More than 2,000 people had indicated they would take part in Saturday’s “kiss-in” but the vast majority failed to show, indicating a gulf between online activism and actual on-the-street protests.

The demonstrators gathered outside parliament for “a symbolic kiss of love”, one participant, Nizar Benamate, told AFP after the display before a group of onlookers and reporters.

“For us, the message got through. It was a success. There were couples and single people, and the couples were not embarrassed in public,” said Ibtissam Lachgar, one of the organisers.

“Our message is that they are defending love, the freedom to love and kiss freely,” she said. 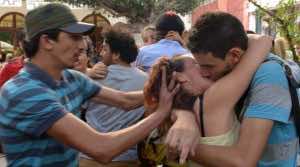 A small group of counter-protesters shoved some of the couples and threw chairs.

“We are an Islamic country and kissing in public is forbidden. A simple kiss can lead to other things. These are atheists who are acting against Islam,” one of them said.

After the brief scuffle the two groups dispersed peacefully.  The couple at the heart of the case, a boy and a girl aged 15 and 14, and their 15-year-old male friend who took the photos outside their school in the northern town of Nador, were arrested last week, charged with “violating public decency” and held in a juvenile centre.

The case lit up social media, with several young people posting similar kissing pictures on Facebook and Twitter and calling for “kiss-ins” in an online rebellion against conservatives.

Amid mounting pressure, the judge ordered that the teens be released on bail three days later, and their trial Friday was adjourned until November 22 to allow “an inquiry into the social circumstances of the teenagers,” their lawyer said.