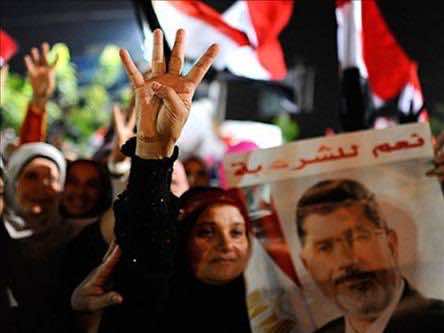 Former lawmaker Abdullah Sadek Nasr of the Muslim Brotherhood’s Freedom and Justice Party (FJP) and senior Brotherhood member Abdel-Nasser Sayed were arrested when the authorities broke into their homes in the southern province of Assiut  Alliance member Atef Hassan Abdel Salam was arrested at the school where he teaches in the same province.

They face charges of inciting violence during the protests that followed the brutal dispersal of two pro-democracy sit-ins on August 14, the security sources said.

Four pro-democracy protesters were arrested while partaking in a rally against Morsi’s ouster outside a court complex in Assuit on Saturday. The demonstrators also called for the release of their relatives who were arrested by the authorities in a recent crackdown, eyewitnesses said.

In Beni Suef in central Egypt, local authorities arrested nine people on charges of inciting violence, and damaging public property, police stations and prayer houses in the aftermath of the August 14 dispersals.

The authorities also arrested 14 more people in the southern province of Minya. Security sources said the those detained face charges in connection with attacks against police stations and churches.

Seven backers of the ousted president were also arrested in the same province for participating in recent Brotherhood-led marches, according to security sources.

Five more Morsi supporters were arrested in the same province as they participated in a march on Saturday.

The authorities had arrested three Morsi loyalists in the province of Fayoum, southwest of Cairo over accusations of inciting violence, the security sources said.

Egypt has seen a nationwide crackdown on the Muslim Brotherhood, the movement from which Morsi — the country’s first freely-elected president — hails following his July 3 ouster. Since then, hundreds of Brotherhood leaders and members were rounded up and accused of inciting violence and participating in attacks on police stations and Coptic houses of worship.

The Brotherhood, however, denies the accusations and accuses the military-backed authorities of making politically-motivated arrests.