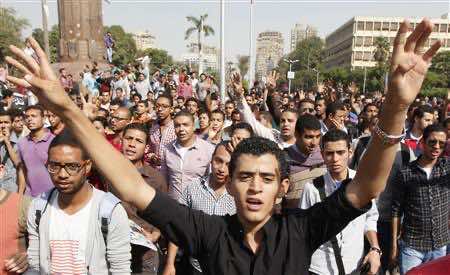 A leading Egyptian sociologist on Saturday warned against turning Egypt’s university campuses into political battlefields, saying if politics seeps out of the nation’s streets and squares into university campuses, this would not only affect the students’ academic performance, but would also have negative impact on their social relations.

“Turning the university campuses into political battlefields is a serious matter,” Soad Abdel Khaliq, a sociologist from Cairo University, told the Anadolu Agency.

“Each of the university students has their own political point of view and political affiliation,” she said. “This is why politics can spoil relations among the students.”

However, students opposed to Morsi also launch counter-protests in support of the military establishment, turning university campuses into a scene of political warfare where tensions are at their highest amid political slogans and banners.

Clashes and fist fights among the students have already become a common occurrence in the rival protests. Fireworks are sometimes used as well as bladed weapons in on-campus fights.

“The current conditions inside the universities do not augur well,” political science professor Safie Eddin Kharboush told the AA. “This is even more dangerous, while our country suffers this state of deep political polarization.”

Some students, however, do not agree. They say they have the right to express themselves and stage whatever protests they want as long as they are committed to peaceful channels of expression.

“Organizing protests on campus is a basic right of each student, regardless of whether this student is a supporter of the ousted president or an opponent,” said Seham al-Sayed, a Dar al-Uloom student.

She complained against the restrictions university security men put to demonstrations inside the universities, including cordoning off the demonstrating students.

“But the students will continue to protest until rights are retained,” al-Sayed, a backer of the ousted president, said.

However, Loai Abaza, a College of Economics and Political Sciences student, called for placing regulations for on-campus demonstrations.

“The Muslim Brotherhood must realize that Morsi will never come back to power,” Abaza said. “This is why they should stop protesting and start campaigning politically.”